The Wire Troll: Kendrick Kicking it up a Notch 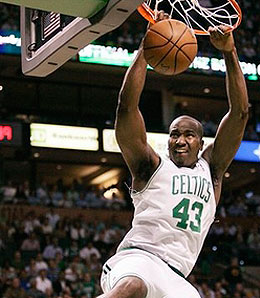 Kendrick Perkins has been forcing his way into fantasy relevance.

Kendrick Perkins, Boston Celtics: The bruising big man has really elevated his game over the past couple weeks, totaling eight or more points and at least seven rebounds in each of his last seven games. He has been even better during his last four, posting three double-doubles. Perkins can also help your team in field goal percentage, blocked shots and pastries consumed – add him in all leagues.

Kevin Love, Minnesota Timberwolves: While Minnesota continues to push the Wizards and Thunder for the title of league’s most miserable franchise, Love has been flashing the talent that made him the fifth overall pick in this year’s draft. He has three double-doubles in his last five contests – the first three of his career – and is showing a nice touch after some putrid shooting performances in mid-November. Odds are other owners have been keeping an eye on the high-profile rookie, so don’t wait much longer to strike.

With Samuel Dalembert struggling mightily thus far, Marreese Speights continues to see increased minutes and has posted some respectable totals. He’s still not doing enough to warrant anything above “watch list” status in standard leagues, but do keep an eye on him…Joel Przybilla has continued to find ways to make an impact off Portland’s bench despite the presence of Greg Oden. Przybilla is averaging eight rebounds per game on the year and he’ll lend a hand in blocks as well. If you’re looking for help in either category, he could be your man.

C.J. Miles, Utah Jazz: Injuries have hit the Jazz hard in the early going, but the play of Miles has to be considered at least a bit of a silver lining. The 21-year-old has logged better than 22 minutes in 12 of Utah’s last 14 games and has responded by reaching double figures in nine of them. He’s also a capable three-point shooter (24-for-63, 38.1 per cent for the season) and is generally good for a couple of dimes as well. Add him now and enjoy it while it lasts.

A torn ACL has ended Corey Brewer’s sophomore season, which strengthens Ryan Gomes’ place in the rotation. In 11 starts, he’s averaging 11.1 PPG and 4.2 RPG – those aren’t stellar numbers, but there’s upside here. Act accordingly…Martell Webster is getting very close to returning to action from the fractured foot that has kept him out all year. He was tabbed as a player on the rise coming into this season and would make a nice stash option if you’ve got the room…Slowly, but surely, Sean May continues to come back from microfracture surgery on his right knee. He may be shut down for a few days with continued tendonitis in that knee, though, so don’t make a move just yet.

Steve Blake, Portland Trail Blazers: The University of Maryland product is quietly playing big minutes and producing quality totals, reaching double figures in eight of his last 10 games. His assist numbers have also bumped up a bit recently, but he’s not doing enough in that category for a point guard. The impending return of swingman Webster adds another body to an already deep back court, which could cut into Blake’s minutes. That being said, those hurting for scoring at the guard spots could do worse than Blake.

Jose Juan Barea has come from out of nowhere to do some serious damage in December, averaging 18.3 points and 4.7 assists per game this month. The man with two first names won’t stay on waivers very long playing like this, so if you have some roster flexibility it might be a good idea to make a move now…Rashad McCants has been hit or miss this season, but the loss of Brewer should lead to steadier minutes going forward. He’s still a borderline contributor for fantasy purposes, but he’s one to at least put on your radar…While Jameer Nelson was out of action, Courtney Lee showed he can make an impact, scoring 19 points on Thursday, but his minutes dropped from 34 to 10 in Nelson’s first game back, so he’s another player better suited to a watch list.

By Herija Green
Tags: Kendrick Perkins
This entry was posted on Sunday, December 7th, 2008 at 10:48 pm and is filed under BASKETBALL, Herija Green, The Wire Troll. You can follow any responses to this entry through the RSS 2.0 feed. Both comments and pings are currently closed.