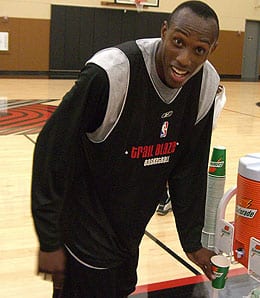 After Travis Outlaw’s recent exploits, fantasy owners are going to the well with him.

The return of All-Star Brandon Roy from a hamstring injury has the Portland Trail Blazers rolling again, winning both games since he returned and three straight overall. However, Wednesday night, they have a tough test in Philadelphia against the 76ers, who have won four straight games.

Roy’s done a good job on the glass since his return, but hasn’t exactly lit up the scoreboard and on Monday in particular he struggled with his shot (3-for-13). This dude was absolutely on fire last month before he got hurt, logging heavy minutes and responding with 25.8 PPG. His touch from outside has cooled since we last checked in on Roy, but with a career high 22.5 PPG, owners won’t moan too much about his declining steals, boards and dimes.

Travis Outlaw earned some waiver wire love this week after his season-high 33-point explosion on Monday. He’s been playing very well lately, but don’t expect Outlaw’s shot to drop like this often (9-of-14 from the field, 4-of-5 from beyond the arc, 11-of-13 from the line). He’s getting extra burn off the Blazer bench this month, and has responded very favourably (17 PPG), but once his shooting reverts to normal levels, the numbers will slip. Overall, this has been a disappointing season for Outlaw, who has so far been unable to build on his 2007-08 breakout. It’s worth picking him up to find out if this is the beginning of him turning it around; after all, he’s averaging 14.6 PPG in his last 11 games, so that ought to provide a boost to any fantasy team. To keep in mind, however, that before Monday, Outlaw had failed to top 20 points in any one game this season.

While everyone was marveling over Outlaw’s exploits, a few of you might have missed a bit of a coming of age game from Greg Oden Monday. He went off for 17 points and 13 boards, sparking interest in leagues where he’s been dumped by a disappointed owner. Other than the whole staying healthy thing, the real issue holding Oden back in his rookie season (take two) is his inability to stay out of foul trouble. He’s starting to show a better touch offensively, but until he can regularly log 30 minutes, Oden’s value will be restricted despite his obvious double-double potential. In fact, the 40-year-old rookie now has 11 double-doubles this season – tops on the Blazers.

Steve Blake’s career year continued Monday as did his state of fantasy underappreciation. All he did was go off for 16 points, 10 assists, four treys and three steals, and, sure, he earned some wire attention, but is still unowned in a surprisingly number of leagues considering the career season he’s enjoying. I love the steals, but I still wish Blake would get to the line more often to take advantage of his excellent FT shooting. He’s matched his career best with three double-doubles this season, but two of them have come in the last three games. Get ‘em while they’re hot, people!

One Blazer who has not been unappreciated this season is LaMarcus Aldridge. Although on Monday he struggled through his first single digit scoring night since mid-November, no one can complain about how his season has unfolded, especially given that LA has shown tremendous improvement as the year has worn on. I’m actually a bit concerned by the heavy workload he’s been given, but so far, he’s shown no ill effects with 19 PPG and 8 RPG this month. Again, I’d like to see Aldridge get a bit more aggressive and earn more trips to the line because I think that’s the real key to him taking his offensive game to a new level, but right now he’s playing as well as he ever has in his brief NBA career.

By RotoRob
This entry was posted on Wednesday, January 14th, 2009 at 7:13 pm and is filed under BASKETBALL, NBA Today, RotoRob. You can follow any responses to this entry through the RSS 2.0 feed. You can leave a response, or trackback from your own site.