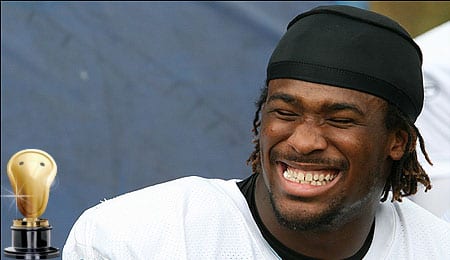 It was pretty obvious how DeAngelo Williams felt about bagging our top honour in 2008.

Well, it’s almost time to put the penguin suit and sequined gown away for another year, but first we cap our 2008 awards extravaganza with some pigskin hardware. Welcome to the 2008 RotoRob Football Awards. Those of you who missed out on the rest of our awards special (i.e., for those who just crawled out from underneath a rock) here you go: baseball, basketball and hockey.

DeAngelo Williams, Carolina Panthers: Prior to fantasy drafts taking place last August, if I had told you Williams would finish the season as the most productive back statistically, I probably would have been committed to the nearest mental institution. But the fact is, Williams carried the load for fantasy teams during the most critical time of the year. In his last five games, he posted two four-touchdown games, along with three 100-yard rushing performances. He rushed for 1,515 yards and scored 20 touchdowns, but also displayed the ability to turn short gains into long ones. Prior to the season’s start, conventional wisdom stated that Williams would split carries with rookie teammate Jonathan Stewart. Instead, after initially sharing time with Stewart, Williams rode his wave of his success towards a career year. When discussing the Fantasy Stud of the Year, Williams was the most consistent performer at season’s end with seven 100-yard efforts in his last nine games. He’ll be a first round pick in 2009 fantasy drafts, without a doubt. 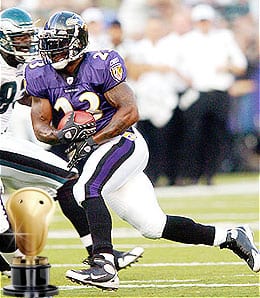 Willis McGahee, Baltimore Ravens: A case can be made for LaDainian Tomlinson here, but we’ll deal with LT later. No, the true dud of ’08 was on many pre-season top 10 lists. McGahee takes the cake for truly letting fantasy owners down this season. Not only could he not completely hold off rookie Ray Rice in the preseason, but he basically lost the starting gig to some guy named Le’Ron McClain after an injury. Awesome. McGahee finished 32nd for running backs in standard scoring and all the way down to 38th in yardage heavy leagues. Once the season ended, the griping started as McGahee blamed a rift between him and the coaching staff for his lackluster play. So this former Hurricane pushed himself out of Buffalo because of the dull nightlife and now is on the outs in Baltimore as well. Logically, the only place where McGahee might succeed is New England. 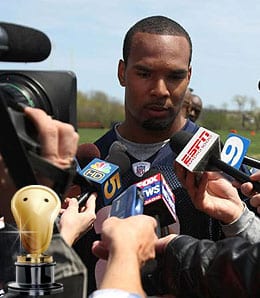 Matt Forte earned plenty of attention for his rookie exploits.

This one is pretty much a no brainer, as Chicago’s Matt Forte positioned himself to be a first-round fantasy pick in 2009 with a great rookie campaign. The Tulane alum was the focal point of the Bear offense, racking up 1,715 total yards with a dozen touchdowns. His skills as a receiver out of the backfield – he set a team rookie record with 63 receptions – makes him even more valuable in point-per-reception leagues. While he may have been denied the NFL hardware because of a certain quarterback in Atlanta, Forte was unquestionably the fantasy star of the 2008 draft.

Honourable Mention: Although he was more explosive than Forte, the Titan Chris Johnson lost too many goal line carries (and deep fried Twinkies) to LenDale White (15 rushing touchdowns) to overtake Forte for the top spot. Still, he averaged nearly five yards per carry and found the end zone 10 times. He’ll be a borderline first- or second-round pick next season.

Others of Note: “Matty Ice” himself — Atlanta’s Matt Ryan, the Lions’ Kevin Smith and Denver’s Eddie Royal all put themselves firmly on the fantasy map for 2009. 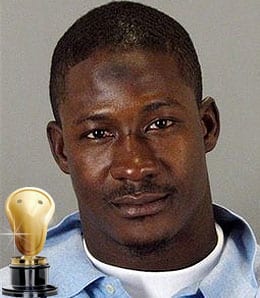 Antonio Bryant, Tampa Bay Buccaneers: Depending on your league’s scoring system, it’s likely that Bryant finished in the top five for receivers with his brilliant second half of the season. After not playing during 2007 and gaining only 733 yards in ’06 as a 49er, Bryant stormed onto the scene in ’08 with the Bucs and left a considerable impact on the team’s passing game. He brought a ray of light to an otherwise rag tag group of receivers.

Bryant tallied six 100-yard receiving games in ‘08, including a 200-yard effort versus Carolina, and scored seven touchdowns on the season. After floundering in San Francisco, Dallas and Cleveland, Bryant found a home in Tampa Bay.

Fantasy Saviour of the Year 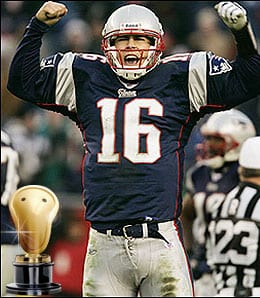 Well, when you take over at the helm of a record-setting offense I guess it shouldn’t come as a surprise when you’re also the player who tipped the balance of power in numerous 2008 fantasy leagues. The Patriots’ Matt Cassel made himself a very wealthy man with his performance this past season, passing for 3,693 yards and 21 touchdowns, including 14 in his last six full games. It’s anyone’s guess at this point whether he’ll hold any value next year – New England still has that Tom Brady guy – but he came through big time last season.

Honourable Mention: It was a great year for signal callers to either bounce back (Chad Pennington) or emerge (Tyler Thigpen, Ryan), but let’s think outside the box for our runner up and go with Tampa Bay’s Bryant (who took home hardware of his own as we awarded above). The dude wasn’t even in the league last year and finished ’08 with 83 receptions for 1,248 yards and seven scores. Not bad for someone who was probably owned in less than 1 per cent of leagues after the first two games of the season.

Others of Note: The QB trio mentioned above (Pennington, Thigpen and Ryan), Baltimore’s McClain, and New Orleans’ Pierre Thomas and Lance Moore.

Fantasy Scourge of the Year 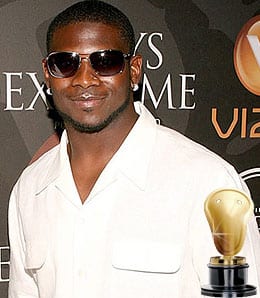 Well, at least LT was stylin’ off the field.

LaDainian Tomlinson, San Diego Chargers: A fantasy scourge isn’t just a high draft pick that does poorly, it’s a player who actively contributes to losing fantasy teams. This could be a goal line vulture of a potential top player (LenDale White, for example), or it could be a top pick like Tomlinson. LT just wasn’t the same this season and that’s probably because of the turf toe injury he suffered early in the season. Or maybe the lack of off-season training really set him back. Had Tomlinson just taken a few weeks off and come back strong, he wouldn’t have received this dubious distinction. But he played through the injury, inconsistently bouncing from impact weeks to completely useless ones. All told, Tomlinson left many fantasy owners high and dry this season. And the kicker? In Week 17, when every respectable fantasy league is already done, Tomlinson went off for three scores. Now that’s a kick in the crotch.

By RotoRob
This entry was posted on Tuesday, January 13th, 2009 at 5:59 pm and is filed under Andy Goldstein, Derek Jones, FOOTBALL, Herija Green, RotoRob Awards. You can follow any responses to this entry through the RSS 2.0 feed. You can skip to the end and leave a response. Pinging is currently not allowed.