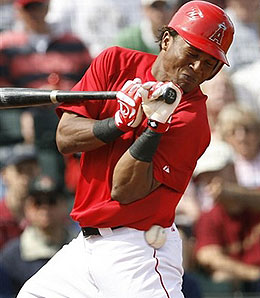 Owners who have jumped on the Erick Aybar bandwagon are feeling no pain.

Welcome to the debut of Game Report, our periodic column that’s going weekly. Every week, I’ll focus in on one game and provide you with all the relevant fantasy tidbits from it. This week, we caught Sunday’s game with the Angels, who have been rolling without their top two starters, taking on the Tigers, off to a very sluggish start, but showing signs of life.

It has been the same story for Tiger starter Justin Verlander all year long. He starts off cruising and then abruptly smashes into a wall. Nothing was different on Sunday.

Verlander only gave up two runs through five innings and then was torched for four earned runs in the sixth, leading to his exit and, ultimately, a 6-2 victory for the Angels over the Tigers.

Torii Hunter, signed as a free agent this offseason, led the way for the Angels, going 2-for-4 with a bases-clearing triple and three RBI. Surging shortstop Erick Aybar also provided a nice punch, going 2-for-3 with three RBI to raise his average on the season to a robust .346.

Los Angeles starter Jered Weaver was as equally impressive on the mound as were his teammates at the plate. He allowed only two runs on four hits in 6 1/3 innings, raising his record to 2-3 on the season and lowering his ERA to 4.21.

Outside of outfielder Magglio Ordonez, the Tigers struggled to get anything going at the plate. Maggs went 2-for-2, but the rest of the lineup was only 3-for-24 and was unable to crack Weaver’s code.

The always reliable Scot Shields came into the game in the eighth inning and wrapped things up with two innings of shutout ball.

The Los Angeles Angels of Southern California Orange County Near Anaheim towards Tijuana now sit at 16-10, tied with the upstart Oakland Athletics in the AL West, while the Detroit Tigers (hey, what a simple name) sit at 11-15, mired in last place in the AL Central. I guess money doesn’t buy championships, but then again if you have seen the Yankees the last eight seasons, you already knew that.

By Daniel Olson
Tags: Los Angeles Angels
This entry was posted on Monday, April 28th, 2008 at 12:17 pm and is filed under BASEBALL, Daniel Olson, Game report. You can follow any responses to this entry through the RSS 2.0 feed. Both comments and pings are currently closed.