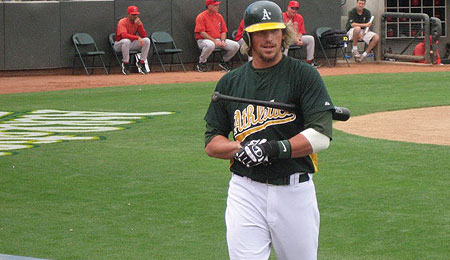 Travis Buck has turned things around after an awful start.

Okay, I get it. Toronto sweeps the defending Champion BoSox and then gets swept by an Oakland team expected to be among the AL’s weakest clubs this season. Now Toronto travels to Texas, who is off to a good start, and Baltimore, which is somehow the AL East leader. The Jays could limp home in a bit of a hole early.

It’s time to take another look at Travis Buck in AL-only leagues. He started the season in an 0-for-22 funk, but apparently all he needed to get his shit together was a dose of Toronto pitching. Buck went 7-for-16 in the three-game series, smacking six doubles, driving in four and scoring three. This kid won’t fly under the radar for long. In preseason, I predicted that Buck would sneak up on people.

Chris Denorfia is batting .400 in limited action for the A’s, but he can’t carve into Ryan Sweeney’s PT with Sweeney also hitting a robust .364. Wasn’t the A’s outfield supposed to suck? Not so far.

Are you getting as sick as I am waiting for Brandon League to develop into the top set-up man we all expected him to be? Five walks in 2 2/3 innings so far? I’d say he’ll wind up in Syracuse before he winds up in an important role in the Toronto pen. Shawn Camp, meanwhile, is looking like he’s ready to get the call if the Jays’ need relief help. He’s tossed six shutout innings through four appearances, with one save while giving up two hits and no walks and fanning nine.

Back with the A’s, Bobby Crosby is finally healthy and hitting better than he ever has so far. But we’re still waiting for that power to return, and until it does, his value will be limited. Watch him closely. That three-hit (including two doubles), three-RBI game on Wednesday could be a sign of things to come.

Is Oakland going to stick with Jack Hannahan at third while it waits for Eric Chavez to return? After a nice season opener, Hannahan is mired in a 4-for-29 skid. Donnie Murphy, back from last weekend’s finger injury, is starting Friday. It wouldn’t take much for him to overcome the underwhelming Hannahan.

After hitting in eight straight games to start the season, Kurt Suzuki is hitless in his last two, but he’s gained some decent waiver wire traction early with his performance. Don’t look for much power, but if your league counts OBP, Suzuki is definitely worthy of attention.

Emil Brown, batting .250, is about as useful as we expected. That is to say, not very much. Time to start the Carlos Gonzalez watch? I give this situation another two weeks. Assuming Brown continues his middling ways, if Gonzalez isn’t up by May 1, I’ll be very surprised.

It wasn’t pretty, but Keith Foulke proved he can still save a game when he closed it down for the finale against the Jays. He was getting the chance with Huston Street having pitched in the previous two games, but this bears watching. Once Oakland fades as expected, Street could be dealt, opening up the A’s closing duties. Foulke has looked hard to hit in the early going and he leads the AL in holds. In AL only-leagues, I’d say he’s worth picking up right away.

We’re loving what we’re seeing from Vernon Wells in the early going. Touted as a great buy-low candidate all offseason by RotoRob baseball writer Tim McLeod, Wells has been incredibly productive, as well as more patient this year. He’s driven in runs in five straight games, producing eight RBI in all over this stretch. Could we be witnessing the early stages of a career year from Toronto’s mega-rich flyhawk?

Let’s get back to that Oakland bullpen situation for a moment. With Rich Harden going down for the 57th time in his career, Joey Devine got the call from Triple-A, and he wound up earning the win in his season debut, tossing a pair of shutout frames. More importantly, he didn’t walk anyone. That’s the key for this former Brave phenom. If Devine can maintain good control, he’s a closer in waiting. Watch his role evolve over the next couple of weeks, and start to put him on your watch list if you need bullpen help, especially in AL-only leagues.

By RotoRob
This entry was posted on Friday, April 11th, 2008 at 9:50 pm and is filed under BASEBALL, Fantasy Notes, RotoRob. You can follow any responses to this entry through the RSS 2.0 feed. You can leave a response, or trackback from your own site.