A’s Rebuild on the Fly 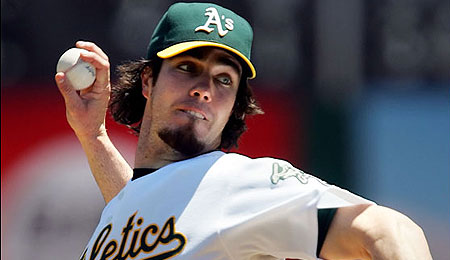 Trading Dan Haren allowed the A’s to restock their farm system, but opened a huge hole in the rotation. (AP)

Kudos to the Oakland A’s for immediately recognizing that their great run of eight straight winning seasons – including five post-season appearances – was coming to an end last season.

Instead of throwing good money at bad money, this team stripped itself of key assets like 15-game winner Dan Haren, Nick Swisher and Mark Kotsay, bringing in a boatload of quality prospects who immediately provided a much-needed refresh of what was becoming a moribund farm system.

GM Billy Beane proved he can manage a loser as well as a winner, as despite the fact that the A’s plummeted from 93 wins and the AL West Crown in 2006 to 76 wins last year, this team looks poised to bounce back to at least .500 if not contention in the near future.

It wasn’t just the moves the A’s made that helped turn things around; it was the moves they didn’t make, i.e., not doing what everyone assumed they would and signing Barry Bonds, something that could have altered the entire chemistry of the organization.

Here are the key ingredients Oakland needs to combine to help rebound from its first losing season since 1998:

Oakland likely has some growing pains in store, but this team has positioned itself to rebound very quickly, especially if veterans like Harden, Chavez and Crosby can stay healthy enough to play large roles. By decade’s end, I expect the A’s to again be challenging for American League titles.

By RotoRob
This entry was posted on Tuesday, March 18th, 2008 at 6:26 pm and is filed under BASEBALL, RotoRob, Team report. You can follow any responses to this entry through the RSS 2.0 feed. You can skip to the end and leave a response. Pinging is currently not allowed.