The Wire Troll: A New Beginning 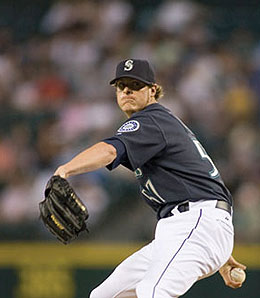 Welcome to the new season of our weekly MLB version of The Wire Troll. Each and every year, the first several weeks of a new season are without a doubt the busiest from a waiver wire perspective, as we attempt to sort through both the contenders and the pretenders and deal with the usual onslaught of injury woes. Some players, that only a week ago were buried on the waiver wire, are now the hottest of commodities.

How many teams in your 12-team league had Mark Lowe or Jason Kubel on a roster at the beginning of April? Need I say more? This year, in an attempt to look at the waiver wire from a deeper perspective, we will be trolling the wire in three separate groupings. Without further ado, let’s take a look at some of those early waiver wire options.

By Tim McLeod
Tags: Mark Lowe
This entry was posted on Sunday, April 6th, 2008 at 3:03 pm and is filed under BASEBALL, The Wire Troll, Tim McLeod. You can follow any responses to this entry through the RSS 2.0 feed. Both comments and pings are currently closed.