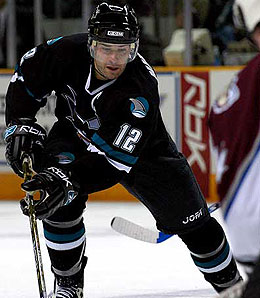 Patrick Marleau had a down year, but he’s been pretty good down the stretch and is a proven playoff performer. (Photo by Jon Swenson)

How does one write a playoff primer when spots are still up for grabs and seedings are uncertain? Well, when you have a deadline, you just roll the dice and hope for the best! Still, there are plenty of definite things you can count on if you’re participating in a playoff pool and we’ll focus on those. I’ll also throw in a few nuggets of what-if scenarios but those could all be irrelevant depending on what happens Friday night, Saturday, and when this finally gets posted (probably Saturday). [Editor’s note — oops, make that Sunday due to hangover.]

There are a number of different playoff pool types, and that means that you may get to move players in and out after a round (or in real time) or you may be stuck with your roster from day one. Consider these tips as general and as all-encompassing as possible, and try to apply them with your playoff pool rules in mind.

Tip One: Bet on sure things in net – that means you’re looking at stability, health, and long-term. Try concentrating your picks on the teams you feel have the best shot to go in for the long haul, especially if you feel like they’ll be playing teams that aren’t clean sweeps. That’s right, I said look for teams that can win a tougher series rather than a team looking at a cakewalk – a tougher series means more games means more fantasy points.

Tip Two: Spread out your offense. The playoffs are a time when secondary scoring makes or breaks both Cup contenders and fantasy teams. For example, a lot of people will probably pass over Patrick Marleau because of his pitiful regular season totals, but a quick look shows that he had a respectable past 20 games and he’s one of the leaders in playoff goals over the past three seasons. Similarly, Brad Richards is reliable in the postseason even though he hasn’t been great in Dallas so far; Richards isn’t worth a top pick right now, but he may slide down and be available in later rounds.

Tip Three: Look for proven playoff performers. Hello, Chris Drury. Hello, Jarome Iginla. These are the guys who’ve always stepped up when push comes to shove, and rather than take people with up-and-down playoff records (Joe Thornton, Pavel Datsyuk – two players that have really only had one good playoff season), focus your top picks on guys that have consistently played well when the chips are on the line.

Tip Four: Avoid injury-prone players. Sure, Peter Forsberg is a great playoff performer, but who knows whether or not he’ll play game-to-game. Though, knowing Forsberg, he’ll be in the lineup when it counts, even when he’s not 100 per cent.

Tip Five: Defense wins fantasy leagues. That’s defense as in scoring from blueliners, a rarity in today’s NHL and even scarcer in the playoffs. That’s why a top defenseman should be in your first two picks. Look at Sergei Gonchar, Brian Campbell, Nicklas Lidstrom, Scott Niedermayer, Mark Streit, and guys along those lines.

Tip Six: Take a closer look at goaltending. Bet on a favoured team with a goalie that’s been steady all season long like San Jose’s Evgeni Nabokov versus Detroit’s groin-pull-o-rama Dominik Hasek. Right now, your favourites are San Jose, Detroit, Anaheim, Montreal, and Pittsburgh. Jean-Sebastian Giguere’s battled injuries, Carey Price is untested, and Marc-Andre Fleury can be streaky. Of those goalies, Nabokov is the best bet.

Tip Seven: Use the first round to judge sleepers. Playoffs are a streaky time of year – remember when Alyn McCauley jumped from two-way checker to playoff scoring demon for the Maple Leafs? If someone gets hot, take a gamble – smart risk-taking is the best way to win a playoff pool.

Now, depending on who makes it in the East, we could be in for some wild showdowns. Washington’s one of the hottest teams in the league, and if it plays well against Florida and get a few bounces its way, the Caps could finish as high as seventh. If the Caps make it, they’re playing with enough confidence and swagger to make their players great dark-horse picks, even outside of Alexander Ovechkin.

Also, if Philadelphia makes the playoffs, don’t be fooled by Daniel Briere and his decent point total (check out his awesome -22, though). Briere hasn’t been the same since he lost consistent playing time with Simon Gagne; if you’re taking someone from Philly, a safe sleeper pick is Vaclav Prospal.

As for the Senators, talk about a team in disarray. Not only do they lose one of their best players indefinitely (Daniel Alfredsson), the Sens can’t figure out if they’re awesome or horrible. They could easily drop out in a four-game sweep in the first round or they could make a deep push; that level of uncertainty means that you’ll want to avoid big names like Jason Spezza and Dany Heatley and use your top forward picks elsewhere.

By Mike Chen
This entry was posted on Sunday, April 6th, 2008 at 1:32 am and is filed under HOCKEY, Ice Chips, Mike Chen. You can follow any responses to this entry through the RSS 2.0 feed. You can leave a response, or trackback from your own site.