The Wire Troll: The Taste of Victory 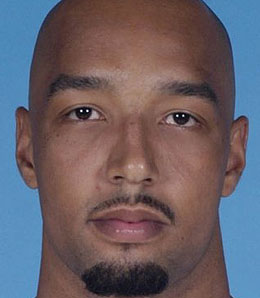 Congratulations. If you are still reading The Wire Troll at this point in the season, then you are either doing really well in your league going into the last week of the regular season or you are just curious to see if I gambled my life savings away in Vegas. Sorry to disappoint, but I actually came away from Sin City in one piece and am fresh off a weekend full of basketball.

Earlier in the week, the theme in the NBA had been the return of several superstars, i.e., Elton Brand, Pau Gasol, Gilbert Arenas and Dirk Nowitzki. However, in the last few days, the theme has shifted to those NBA superstars not playing. On Saturday night, the Celtics’ Big Three all sat against Charlotte. Other big-time fantasy contributors who did not play Saturday night included Antawn Jamison, Chris Kaman, Ron Artest, Brad Miller, Drew Gooden and Gerald Wallace. With the absence of so many superstars, many players are seeing more court time during the most critical period for fantasy owners.

Leon Powe: With the Kevin Garnett, Paul Pierce and Ray Allen all seeing downtime in Boston, the Celtics are a great source of fantasy equity during the last week of the season. When KG was injured during the middle portion of the season, Powe responded with effective production in his increased minutes. Since the Celtics clinched the number one seed in the Eastern Conference, Garnett’s minutes will likely decrease even more, so look for Powe to once again respond. In Powe’s last three games, he is averaging 12.3 PPG and 9.3 RPG. He should be picked up if your team needs rebounds down the stretch.

Kendrick Perkins: Perkins has been a Waiver Troll regular in the past three months. Garnett’s decrease in minutes has also led to increased production by Perkins. Perkins is a guy who can help your team with rebounds and blocks, but provides no other substantial production. In his last three games, he is averaging seven rebounds and 1.3 blocks. Perkins should be picked up in deeper leagues.

Francisco Garcia: With the plethora of injuries in Sacramento, Garcia has finally seen steady minutes during the home stretch of the NBA season. A reliable scorer and three-point shooter, Garcia has been solid all season when he gets substantial minutes. In his last four games, he is averaging 15.5 points, 4.8 rebounds, two assists and 1.5 threes. If you are looking for a cheap source of points, Garcia is a viable option.

Tyrus Thomas: The mystery that is the Chicago Bulls’ rotation became a little clearer with the injury to Gooden. As a result of the injury, Thomas will once again see consistent minutes in the next week for the Bulls. He is definitely worth picking up when he is getting his PT. On Thursday night against the Celtics, Thomas played 37 minutes and put up 24 points and seven rebounds. On Saturday night, in 23 minutes, Thomas only scored two points, but contributed seven rebounds and three blocks. Thomas will have value in deep leagues as long as Gooden is out.

Steve Blake: Blake has been another member of The Wire Troll’s most valuable player club. With the injury to Brandon Roy, Blake has stepped up his game considerably. In Blake’s last five games, he is averaging 12.4 points, 6.8 assists and 3.4 rebounds. He is definitely worth picking up and should be a good source of assists even if Roy returns from his injury.

Good luck to everyone in the final week of the regular season and stay tuned for a season-ending wrap-up next weekend.

By RotoRob
This entry was posted on Sunday, April 6th, 2008 at 9:17 pm and is filed under BASKETBALL, Jordan Frank, The Wire Troll. You can follow any responses to this entry through the RSS 2.0 feed. You can skip to the end and leave a response. Pinging is currently not allowed.