Dear RotoRob: Is Hakim a Dream? 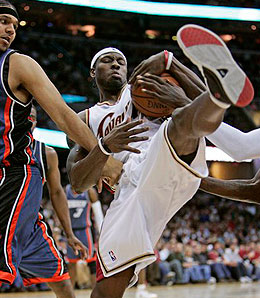 Ben Wallace may still do a fantastic can-can girl routine, but concerns over his back and overall ineffectiveness have really limited his value. (AP Photo/Mark Duncan)

Would you drop Big Ben for Hakim Warrick when your team is:

Yes, Ben Wallace isn’t the same player he once was, especially with concerns over his back, and the Grizzlies need Warrick down the stretch more than ever.

I was wondering if you would do me a favour and rank these players for me.

I own three of them, and two are free agents. I’m trying to decide which players I keep and which I pick up.

I presently have on my team: Delonte West, Juan Carlos Navarro and Daequan Cook (yes, it’s a very deep league). Bonzi Wells and Flip Murray are free agents. Would you pick either one of them up and cast aside any of the three I mentioned?

I see them as West, Navarro and Cook, then Murray and Wells. Murray won’t be well rounded enough to make a real difference and Wells is going to be on and off. I’ve watched Murray warm up and talked to him over the past week and I like him as a scorer, but not as my PG.

By RotoRob
This entry was posted on Monday, March 31st, 2008 at 10:14 am and is filed under BASKETBALL, Dear RotoRob, RotoRob. You can follow any responses to this entry through the RSS 2.0 feed. You can leave a response, or trackback from your own site.