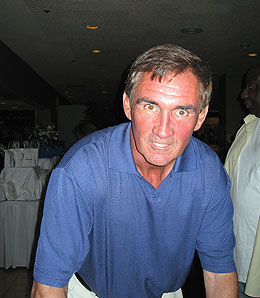 Mike Shanahan has plenty of work to do to get the Broncos back in contention.

While Jay Cutler had somewhat of an inconsistent year, Brandon Marshall was as good from start to end as any wide out in the league. With wide outs, we tend to look at the bad games rather than the good ones. It’s great when a receiver has a couple 200-yard games en route to a statistically great season (ahem, Chad Johnson), but if the games around those 200-yard ones look something like two catches, 26 yards and no scores, then how much did said player really help? Marshall had exactly zero useless game for fantasy teams, meaning he garnered at least 65 yards, a score, or both every week of the season. Unfortunately, it appears as though a family scuffle (I still blame the food wrapper) might derail the early portion of Marshall’s 2008 season. We hate when that happens.

During Denver’s successful period under head coach Mike Shanahan which included back-to-back Super Bowls, it was led by a legendary quarterback (John Elway), one of the league’s best running backs (Terrell Davis) and perhaps the best offensive line in football. The offense was supported by a vastly underrated defense. Fast forwarding to present day and Denver is missing all of those components. While ranking ninth in the rushing, the traditionally strong running Broncos failed to produce a 1,000-yard rusher. Travis Henry proved to be a bust in the backfield with just four touchdowns; Cutler has not arrived yet as an NFL quarterback; and on defense Denver finished 30th versus the run.

Denver had roughly $15 million worth of cap space and have been relatively active thus far in free agency. Feeling the need to address its defense and offensive line, the Broncos went to work. Former Detroit Lions linebacker Boss Bailey signed a five-year deal to join his All-Pro cornerback brother; ex-Charger safety Marlon McCree stayed in the division to join the Broncos; and the Broncos took guard Casey Wiegmann away from the Chiefs by signing him to a deal.

With Marshall’s status a bit up in the air and Javon Walker playing elsewhere in 2008, we could definitely see the Broncos going with a wide out here. But what about that offensive line? Not talking to the media can only help so much, or are they actually talking now? Either way, at some point, you need some actual talent. Boise State’s Ryan Clady and Vandy’s Chris Williams would look good paving the way for whoever takes carries in Mile High City.

Quarterbacks – Cutler is entrenched as the team’s starter and he has fantasy value as a backup. He possesses a tremendous arm and when unleashed can be very effective. Coming off a season in which he fired 20 touchdown passes to 14 interceptions, Cutler has room for growth. As his third year looms, his decision making needs to improve for Denver to become a contender again in the AFC.

Running Backs – Henry and Selvin Young and Andre Hall — fantasy owners that relied on any of them were summarily reminded exactly why the Broncos are coached by a guy named Shenanigans. Okay, maybe it wasn’t all Shanny’s fault, what with Henry’s sort-of legal issues and Young’s injury. Still, every year the fantasy football world is mesmerized by who will run the ball in Denver, and it’s been a long time since the answer actually mattered.

Wide Receivers – Marshall’s injury causes us some worry. Not so much because of the actual injury, which apparently is kind of serious. But after seeing countless wide outs with the “head case” label, the thought of one of the game’s most promising youngsters falling into the same pattern is frightening. What next? He runs over a police officer with his car? He punches his coach in the face at halftime? He holds a press conference on his front lawn?

Tight Ends – The worst move the Broncos have made in team history occurred when they foolishly decided to bring in Daniel Graham. Second-year man Tony Scheffler was all sorts of a sleeper candidate, and he played alright, totaling 49 catches, 549 yards, and five scores, but Graham took away at least 25 per cent of “The Scheff’s” statistics.

Defense/Special Teams – The Broncos’ defense suffered last season and will look to return to former glory. Special teams has a void to fill after kicker Jason Elam signed with Atlanta. Glen Martinez showed flashes of hope in the punt return area, but Denver is missing a threat returning kicks.

The Skinny – When the biggest fantasy news involves off-season injuries to main contributors, it means your season might be looking grim (see Steelers, Pittsburgh).

By Andy Goldstein
This entry was posted on Sunday, March 30th, 2008 at 4:21 pm and is filed under Andy Goldstein, Derek Jones, FOOTBALL, Team report. You can follow any responses to this entry through the RSS 2.0 feed. You can skip to the end and leave a response. Pinging is currently not allowed.