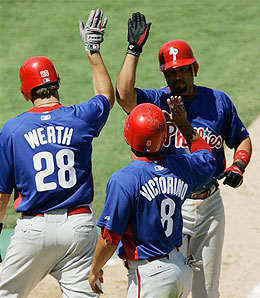 Pedro Feliz, a RotoRob sleeper pick, should win over his new teammates with his home run prowess. (AP Photo/Paul Sancya)

For the first time since 1994, the Philadelphia Phillies enter a season with a bullseye squarely on their backs – in 2008, they must defend the NL East Championship for the first time in well over a decade.

Are they up to the challenge?

Well, with an awesome attack that includes 2006 NL MVP Ryan Howard, 2007 NL MVP Jimmy Rollins and Chase Utley, always a candidate and perhaps the team’s true MVP, no one doubts this team’s ability to put up runs again. Last year, the Phils led the NL in runs, slugging and OPS en route to 89 wins.

But when they kick off the 2008 season at CBP this afternoon at 3:05 p.m., taking the mound will be Brett Myers who encapsulates the team’s burning question – while we wonder if Myers can successfully complete the starter-turned-closer-back-to-starter journey, questions abound about the depth of the pitching staff on this club. A year ago, the Phils ranked 14th out of 16 NL teams in WHIP, and if they have designs of reaching the 90 wins minimum that it will take to repeat, that’s a figure that must improve.

An already strong offense, which includes overpriced Pat Burrell (who in 2007 showed more patience than ever before and got back to the 30-homer plateau), looks to be even more powerful with the addition of Pedro Feliz. Can he finally fill the third base hole Philly has struggled with since Scott Rolen felt he was forced out of town? Judging by a slugging percentage that was 57 points higher away from pitching-friendly AT&T Park, a shift to the hitter haven that is Citizen’s Bank Park should do wonders for Feliz. In fact, we have identified Feliz as one of our top ten sleepers heading into the season.

Gone from the Phillies is All-Star Aaron Rowand, coming off a career season. While the team shouldn’t have difficulty replacing his production (along with Feliz, 10-year veteran Geoff Jenkins joins the team after spending his entire career watching sausages race around the park), there are concerns that Rowand’s presence in the clubhouse will be sorely missed. Will the departure of the man who runs through brick walls leave a leadership gap on the Phillies?

Myers wants to help fill that role by becoming more of a leader this season, but he comes with his own baggage, not to mention the fact that he faces the major task of reacclimatizing himself to starting. What happens if he struggles to make the transition back? Will he opt to go ballistic and smack his wife around again? That won’t exactly do wonders for team chemistry, will it?

The Phils are really banking on Myers teaming with Cole Hamels to provide a legitimate one-two punch atop the rotation. This is an area Philly has struggled with for years. You’ve got to go back to 1980 to find the last time the Phillies had a pair of 17-game winners. Even putting 15-game winners together has proved difficult – the team hasn’t done so since 1999.

Should one of those two falter or get hurt, things drop off quickly. Jamie Moyer is, what, about 56 years old? One of these days, his 68 mph heater won’t get the job done anymore. Kyle Kendrick was a revelation last year as a rookie, but he was battered rather inauspiciously during Spring Training. Rounding out the rotation is underwhelming Adam Eaton, who somehow won 10 games last year, but was absolutely crap in the first year of an ill-advised, three-year, $24-million deal. Eaton was bitch-slapped this spring as well, but will start the year as the No. 5 man.

Behind Eaton, Chad Durbin and J.A. Happ await. Scott Mathieson might be a factor at some point, but he’s still battling back from Tommy John surgery.

Does that comfort you, Phillies’ fans?

Kyle Lohse, who went undefeated as a Phillie after being acquired at the 2007 trading deadline, is gone. So is injury prone Jon Lieber and the absolute bust that was Freddy Garcia.

The bullpen comes with its own question marks. Closer Brad Lidge will open the season on the DL, but should only miss about a week, leaving the job for old man Tom Gordon to handle at the outset. Should Gordon be needed to close for an extended period at any point – a significant possibility given the physical and mental frailty of Lidge – Philly will be trouble.

Set-up man Ryan Madson was very effective last year, but he can’t be overused the way he was in 2007, a situation that led to shoulder issues. J.C. Romero is a fantasy lefty specialist, but asking him to do more is foolhardy. If you think he’ll hold righties under .200 in his second season in the NL, you are courting disaster. And Clay Condrey only has a job because of yet another injury to Francisco Rosario.

The bottom line here is many things will have to break right for this team’s pitching staff to be an asset. So once again, it will be up to the offense to compensate for the lack of arms.

Barring some miraculous events (Myers stays healthy and wins at least 15 games; Kendrick duplicates or exceeds what he did last year; Eaton pitches well enough to stay in the rotation; Lidge stays sound in body and mind; Gordon avoids his annual injury, etc.), this lineup better score at least 900 runs if Philly has designs on repeating.

Unfortunately, the Phils have one of the weaker minor league systems in the game, lacking a true uber prospect, and offering nothing much in the way of players who can provide immediate help.

A couple of strong pitching prospects to watch on a long-term basis are righty Carlos Carrasco and lefty Joe Savery, but with Carrasco still needing to master Double-A and Savery entering 2008 with just seven professional starts under his belt, neither will be factors for the parent club this season.

The team’s top position prospect, Adrian Cardenas, enjoyed a huge season at A-ball, scoring 70 runs in 127 games while batting .295 and showing good gap power. However, he’ll need to make better contact and is still quite a ways away from the Show (not to mention the fact that the middle infielder is blocked by both Rollins and Utley). He’s a solid prospect, but assuming he remains in the organization, Cardenas will have to either switch positions or will likely be ticketed for a utility role.

By RotoRob
Tags: Philadelphia Phillies
This entry was posted on Monday, March 31st, 2008 at 1:19 pm and is filed under BASEBALL, RotoRob, Team report. You can follow any responses to this entry through the RSS 2.0 feed. Both comments and pings are currently closed.