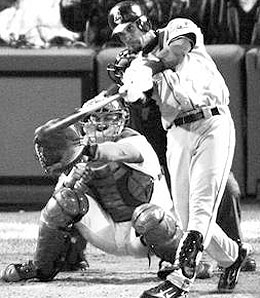 With Spring Training drawing to a rapid close (and given that we’ve already had a couple games that count, we’re damn confused about whether the exhibition season is ongoing or not), a quick look at some of those early sleeper candidates and potential waiver wire acquisitions would be in order.

1. Franklin Gutierrez, CLE, OF – The job is his to lose heading into the 2008 season and thus far, he has most certainly reaffirmed that the Tribe made a solid decision. That .395 batting average combined with two homers and ten RBI, suggest he’s ready to enjoy a very solid start to the 2008 campaign. Drafted either very late or not at all, the potential is most certainly there for Gutierrez to put a 20-HR, 15-SB season this year.

2. Matt Diaz, ATL, OF – With the Spring Training struggles and subsequent demotion of Brandon Jones, it looks like we’ll finally get to see Matt Diaz batting against both lefties and righties this year. If he can hit those righties half as good as the lefties, there could be some pleasant surprises in store in 2008. With the outfield position being not as deep as we’ve seen in the past, Diaz could turn into a rather respectable late round choice.

3. Wandy Rodriguez, HOU, SP – Is there any reasonable explanation for those home/road splits in 2007? With 158 stikeouts and a 2.94 ERA at Minute Maid, it certainly bears at least a second glance. Any improvement in those road splits and Rodriguez could be a very nice addition to the back end of your rotation this year.

4. Masahide Kobayashi, CLE, RP – Masahide Kobayashi comes to the Tribe bullpen this spring with some very solid credentials. Those 200-plus career saves in Japan, combined with Smokin’ Joe Borowski’s ability to turn three-run saves into one-run saves, makes this a most interesting situation. I guess the question would be, if and when Borowski fails, do they move Rafael Betancourt out of the set-up role he’s been very successful in or take advantage of the proven closer ability in Kobayashi? I’m betting on Kobayashi at this stage.

5. Alexei Ramirez, CWS, 2B/SS/OF – Heading into camp this spring it was almost a foregone conclusion that the former star of the Cuban National program would be starting 2008 at Triple-A. With Danny Richar on the mend for the next four-to-six weeks, and Juan Uribe on and off waivers, that leaves us with Pablo Osuna. Those 17 Spring Training RBI to date and the ability to play multiple positions, could lead Ramirez to fill a super-sub role for both Ozzie Guillen and your fantasy team.

6. Chris Synder, ARZ, C – Snyder managed to have himself a very solid second half in 2007 and thus far has carried that play over to Spring Training. There are already rumblings in the desert that Snyder might be forcing his way higher in the batting order. For a player that is either getting drafted late as an end play, or not at all, there are reasons for optimism heading into 2008.

7. Eugenio Velez, SF, 2B – Come on San Francisco, find a place for this guy to get some at bats this year. He’s currently the offensive leader in just about every category this spring and those 14 stolen bases are looking very solid. This could be a huge bargain for those looking to pad those stolen base numbers in ’08.

8. Pedro Feliz, PHI, 3B – Now Feliz isn’t exactly a spring chicken, but how many leagues is he currently sitting unowned in right about now? The move to Philly this year could potentially move Pedro up a notch or two and possibly into the 25-85 range, making him a serviceable option at the corner for this year.

9. Carlos Gomez, MIN, OF – After a very slow start this spring, Carlos Gomez has turned it up a notch and looks to be starting 2008 in the lead-off role. The main prize in the Johan Santana sweepstakes has already swiped ten bases this spring and for those looking for some serious speed he could be the answer. Just be wary there will be undoubtedly be some bumps in the road.

10. Jason Bergmann, WAS, SP – If Bergmann can remain healthy and continues to limit those base on balls, he could be an option in deeper formats this year. Someone is going to win some games in Washington this year and Bergmann could very well be that man.

By Tim McLeod
This entry was posted on Sunday, March 30th, 2008 at 10:25 am and is filed under BASEBALL, Draft strategy, Tim McLeod. You can follow any responses to this entry through the RSS 2.0 feed. You can skip to the end and leave a response. Pinging is currently not allowed.