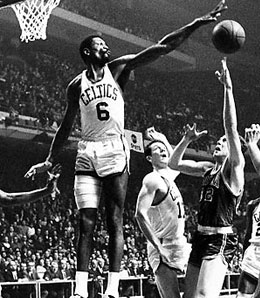 Bill Russell, left, who knows a thing or two about Celtic greats, has given his seal of approval to Kevin Garnett.

The Boston Celtics are the first NBA team to clinch a playoff spot, riding Kevin Garnett to down Detroit Wednesday night thus ending a two-year streak of watching the playoffs on TV. It’s a great turnaround, one which we discuss in today’s Daily Dose.

J.R. Smith is canning them from deep; LeBron James made an MVP statement in MSG; Tracy McGrady is leading the Yao-less, but still scorching Rockets; Michael Redd took a head butt to the nose; Chauncey Billups kept the Pistons close for a while; and Kendrick Perkins is looking valuable suddenly.

Perhaps you live Germany and love both Dirk Nowitzki and David Hasselhoff, but are having problems with Google. Fear not. We’ve got you covered with all the fantasy news fit to print in today’s Dose.

By RotoRob
Tags: Boston Celtics, Kevin Garnett
This entry was posted on Thursday, March 6th, 2008 at 3:01 pm and is filed under BASKETBALL, NBA Daily Dose, RotoRob. You can follow any responses to this entry through the RSS 2.0 feed. Both comments and pings are currently closed.