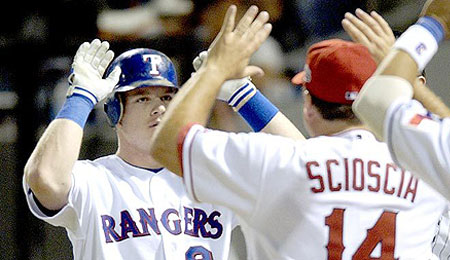 If Hank Blalock can’t stay healthy and put up some solid numbers, Texas is in even bigger trouble.

If the Texas Rangers are going to somehow avoid a ninth straight season finishing behind the top two teams in the American League West, they will need a major recovery from third baseman Hank Blalock.

Okay, no one is expecting Blalock to rival Alex Rodriguez as the best hot corner man in the game, but after two horrible, injury-riddled seasons, it’s time for Blalock to put his career back on track.

Unfortunately, he’s already experiencing some bumps in the road this spring. Soreness in his right shoulder earlier this week was expected to sideline him a day or two. That was only compounded by a car accident yesterday. It seems that Blalock’s car was read-ended – as he drove home from Chuck E. Cheese. Uh, yeah. The upshot was he experienced some whiplash, but said he’ll be alright.

We’ve heard that before.

But considering he is finally taking grounders in the field for the first time since May and is off to a good start at the plate (2-for-5 with a double), the Rangers have to pray that this is truly just a minor woe for a player they are hoping will compete for Comeback Player of the Year Honours.

“I’m excited to get back to where I belong as a player,” Blalock said, “For us to win, I need to have a big year.”

He’s bang on there. Let’s face it, Texas isn’t exactly flush with power threats the way it once was. In fact, Blalock is the only current Ranger who owns a 30-homer season on his resume, so if their projected clean-up hitter isn’t up for the task, it’s going to be another very long summer in Arlington (of course with early injury problems to “ace” Kevin Millwood and promising youngster Brandon McCarthy already causing concern, it may be a long summer either way).

So which Blalock will we get in 2008? The one who garnered MVP attention in 2004 when he smashed 32 dingers and drove in 110 runs, or the one who barely slugged .400 in 2006 and then missed most of last year after having a rib removed?

I think it’s reasonable to assume that Blalock will be capable of putting up an OPS slightly higher than 800. Don’t pay for much more than that.

Oh, and someone please tell him that Chuck E. Cheese is a dangerous place.

By RotoRob
This entry was posted on Wednesday, March 5th, 2008 at 9:19 pm and is filed under BASEBALL, Injuries, RotoRob. You can follow any responses to this entry through the RSS 2.0 feed. You can leave a response, or trackback from your own site.