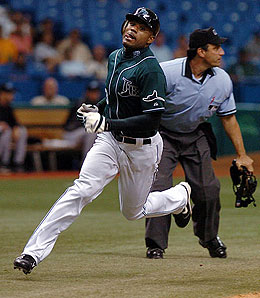 Tim missed out on nabbing Carl Crawford in the second round, but rebounded like a pro.

After getting in those first 40 or 50 mock drafts, it was high time to actually start playing the game for real. The 2008 fantasy season commenced for me on February 24 this year, my earliest start ever. The “Fantasy Writers League” is a 12-team league of industry writers in a standard 5×5 format. I’ve been touting the “All Outfield, All the Time” strategy for a while now and it was time to put all that practice to work. I ended up picking in the ninth slot and decided that I’d forego my usual reach on Carl Crawford and go with the stud of all stud second base types, Chase Utley.

The plan was for Crawford to hopefully fall to me on the way back in the second round. I gambled and lost as Crawford didn’t fall, so it was off to work on Plan “B.” My usual strategy is to lock up one of the 40-plus stolen base guys early, but this time around a more balanced approach to stolen bases would be required. After acquiring Utley, I moved forward, attempting to fill the outfield early and to vulture my pitching in the mid to later rounds. Overall, I’m relatively happy with this first effort. My pitching is going to be somewhat of a struggle, but I’ve always felt confident that the waiver wire can, and will be my friend.

The following are some random observations that I think should be of interest to all:

1. Starting pitching seemed to go a bit faster than in my practice mocks. Be very careful it doesn’t pass you by.

2. Stolen bases continue to fly off the board early. Do you really want to be the guy picking up Juan Pierre somewhere in the sixth round?

3. Give yourself ample time to review the ranking system of the site you’re using for your draft, or input one of your preferred choice. Most of us have done our practice and research and quite possibly a slew of mock drafts, but until you actually see the draft interface you are using there are always those little hidden gems lurking that you want to be able to take advantage of. Brandon Lyon is buried somewhere in the middle of nowhere in the Yahoo! rankings and most certainly could have some great value as a late-round closer pick. Again, I can’t reinforce enough getting to the site early and doing the necessary homework.

Below, you will find the summary of my draft, with the overall pick number in brackets.

By Tim McLeod
This entry was posted on Tuesday, March 4th, 2008 at 3:47 pm and is filed under BASEBALL, Draft strategy, Tim McLeod. You can follow any responses to this entry through the RSS 2.0 feed. You can leave a response, or trackback from your own site.