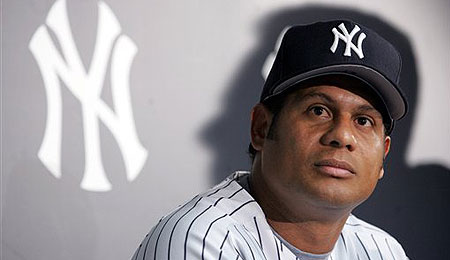 Is Bobby Abreu a wise use of a second round pick in a keeper league with very stringent rules?

You have helped me in the past, even posted my question on RotoRob.com, so I figured I would seek your help again.

I have a bit of a conundrum in my fantasy baseball keeper league. We just drafted last year, so this is the first offseason and thus the first time we choose our keepers for next year and, in some cases, for years to come. It’s a 12-team Roto league and the rules are as follows:

My options are as follows:

I would love to hear your thoughts. What do the more seasoned answer guys think? I was hoping we could at least open a dialogue as we have until the middle of March to make a decision.

Thanks and my apologies for the lack of brevity. Hope all is well and keep up the terrific work.

First, I’ve played in Diamond Mind Baseball sim leagues for over a decade and I don’t like your keeper rules with regards to the round thing. That is stupid since someone could select Francisco Liriano in the first round and be done with him for a season and lose their next first round pick, as I understand it. Rules with the draft times don’t make the league fun from my experience because it is not realistic — too much turnover in players for my taste. You can draft great and get punished for it essentially. Anyways, on to your dilemma.

You have to keep Johan, Mauer, Upton, Pence, Bailey and Matt Holliday. Vlad would be nice, but you just don’t have the room for him. I’d consider packaging him with say, Bailey, and see if you can flip them into a top hitter or starter. That way you stay under the six-man rule and get another top player for a guy that was going to be a number casualty. Oh, you gave up way too much for Vlad to start with. Lincecum and Gallardo are very good young pitchers.

Package Vlad and Bailey and see if you can snag a top tier starter or hitter. I’d want a pitcher since you have the hitters in place already.

By RotoRob
This entry was posted on Sunday, February 17th, 2008 at 4:38 pm and is filed under BASEBALL, Dear RotoRob, RotoRob. You can follow any responses to this entry through the RSS 2.0 feed. You can leave a response, or trackback from your own site.