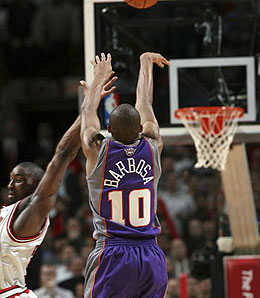 Calling Leandro Barbosa “very” disappointing might have been extreme, but the fact is he hasn’t come close to duplicating his Sixth Man of the Year performance of a season ago.

Hey Rob, I am currently first in my Roto league, but I’m looking to get rid of Steve Nash because the TOs are killing me.

Do you like Chris Paul or Baron Davis for a heads up trade?

Davis has been fantastic this year, but we all know the injury is just a matter of time. So take the man who’s been the best fantasy player in the NBA all year – Paul. In fact, right now, fantasy aside, Paul’s got my vote as NBA MVP. Davis has been clutch, and healthy, but Paul is the stud of studs. Make the deal immediately if it’s on the table.

You write, “Way to sap the strength of your Warriors, Nellie” in response to Stephen Jackson playing 42 minutes, yet you praise the fact that Monta Ellis plays a full 48 even calling him a warrior? Wouldn’t that make Jackson a so-called “warrior” as well? A lot of people dog this guy, but he has led the Warriors since coming back from suspension. Some more intelligent writers than yourself even call him that team’s MVP and claim he should be at the All-Star game, yet all the acclaim goes to Monta because of a few terrific games.

I think it’s clear that you are a Monta owner which is a huge pet peeve when reading biased articles. You can tell when a writer has a player on his team because he builds him up so much while not distributing credit elsewhere. Good job, I will never read your articles again.

Jackson has played at least 42 minutes a game for the past four, and while he’s a bulldog, I do get concerned about the number of minutes Nellie plays these guys sometimes, especially considering Jackson’s job was to guard the much bigger Stoudemire Wednesday night. What Ellis did (playing 48) is unbelievable because of the type of game it was. Was it wise to do that? Not for many games, certainly, but he was in the zone last night, so Nelson left him in there. I’d cringe if that happened too often.

While you’re right that it sounds like a contraction, and I’ll concede that it may very well be, you’re wrong on two other scores:

Obviously, you’re entitled to your own opinions and you can read whatever articles you want, or not as the case may be, but you should know all the facts.

You do a great job. But how can you say Leandro Barbosa has been very disappointing from downtown? He has 111 three-pointers. He has as many as Nash. He is a 3-point specialist. He is getting almost two a game. Seems pretty good to me.

Thanks for the note and compliment.

Perhaps saying “very” disappointing was a bit much, but the fact is that he’s shooting just 38 per cent from beyond the arc this year compared to 43.4 per cent last season. Yes, he’s getting 2.1 treys per game. Pretty damn good, but last year he averaged 2.4 per game.

I was trying to explain that after last year’s breakout season, Barbosa has kind of backtracked a bit, and that’s where my disappointment lies.

Hey Rob, I’ve got a hoops question. I need to sit one for next week. Key swing categories are 3s, blocks and FT percentage. Who do I sit?

Jones gets you more 3s, but Marion gets you the blocks and FT percentage. I wouldn’t start Dunleavy right now as the Pacers are in a state of flux. If it were my team, I would start Marion and never mention Jones in the same sentence as the Matrix ever again. Ever!

By RotoRob
This entry was posted on Sunday, February 17th, 2008 at 12:08 am and is filed under BASKETBALL, Dear RotoRob, RotoRob. You can follow any responses to this entry through the RSS 2.0 feed. You can leave a response, or trackback from your own site.