Texas: Then and Now 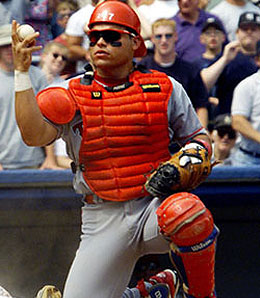 Back in 1996, Texas began a golden era led in part by young star catcher Ivan Rodriguez.

A dozen years ago, the Texas Rangers earned their first ever playoff berth and the first of three trips to the postseason in a four-year span. Clearly, it was the franchise’s golden era, as they have yet to return to the playoffs since. In fact, as we’ve eluded to in the past, they haven’t really had a sniff of it.

Check out the lineup from that 1996 squad:

The pitching staff was hardly anchored by an ace, but included five starters who won at least 11 games led by Ken Hill and Bobby Witt, with 16 victories each. Last year, the Rangers failed to have a single pitcher record as many as 11 wins.

Closer Mike Henneman was as shaky as they come, but he saved 31 games that season. Ed Vosberg and Jeff Russell were important cogs in that bullpen.

This was a pretty damn good team, driven by an incredibly potent attack that featured a bit of everything, including the MVP (Gonzo) and the Fruit Loops Kid (Tettleton).

Now, let’s have a look at the lineup the team expects to trot out there this season:

Catcher – Jarrod Saltalamacchia (The key to last season’s Mark Teixiera deal, he is far from a proven commodity)
First Base – Ben Broussard (He couldn’t even stick on a crappy Mariners’ team)
Second Base – Ian Kinsler (One of the better young keystone corner men in the majors, a player definitely on the rise)
Shortstop – Michael Young (200 hits annually; hard not to like that)
Third Base – Hank Blalock (A big question mark after major shoulder problems, but a serious sleeper possibility)
Left Field – Marlon Byrd (A big surprise last season; can he do it again?)
Centre Field – Josh Hamilton (Is he truly past his problems? Immense talent started to show in 2007, but risk remains high)
Right Field – Milton Bradley (Again, an injury/implosion risk, but has possible upside)
Designated Hitter – Frank Catalanotto (great on-base guy, but can’t play against lefties)

None of the possible bench players (Gerald Laird, Jason Botts/Nelson Cruz, Ramon Vasquez and Chris Shelton) looks like someone who could step up and surprise us.

Does this lineup scare you? It’s young and there is lots of potential upside, but more questions than answers with big holes at first base and DH – two traditional power positions.

The rotation is again led by “ace” Kevin Millwood, which pretty well tells you everything you need to know. The rest of the projected starters each brings his own baggage to the table: Vicente Padilla, Jason Jennings, Brandon McCarthy and Kason Gabbard.

I don’t see much upside there, unless Millwood has a major resurgence and finally starts earning his big salary and McCarthy takes a massive step forward. I’d be shocked if Jennings is capable of even delivering a league average performance, and Padilla as a No. 2? Uh, yeah.

C.J. Wilson returns as closer, and while he showed promise in the role last year, he’s hardly proven, so I won’t be shocked if he crashes and burns. Luckily, this is an area of relative strength for the Rangers, with several options to replace Wilson should he be unable to handle the closer gig. Notably, Joaquin Benoit, Kazuo Fukumori and Eddie Guardado are all quite capable. Frank Francisco is a solid set-up man and Wes Littleton has some upside as well.

The bottom line here is that Texas, despite a couple of intelligent recent moves to help rejuvenate the franchise, has a long way to go before returning to its glory years from the mid 1990s.

By RotoRob
This entry was posted on Saturday, February 16th, 2008 at 11:50 pm and is filed under BASEBALL, RotoRob, Team report. You can follow any responses to this entry through the RSS 2.0 feed. You can skip to the end and leave a response. Pinging is currently not allowed.