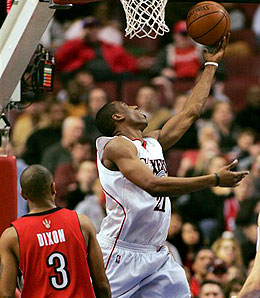 We have a first here at Next Generation – a repeat performer, both among the rising and the falling. This is particularly rare because the one thing we do know about rookies is that they are very likely to be inconsistent. Someone mentioned as rising one week may very likely find themselves among the falling the following week. The idea is to stay ahead of the curve and find rookies who are either playing consistent minutes, receiving an opportunity for expanded minutes, or appear on the verge of taking their game to another level. Last week, I mentioned Thaddeus Young as someone to keep an eye on and, while his week was nothing special, he did flourish Monday night in 30 minutes of action. He’s a perfect example of an opportunity to find a low-risk, high-reward rookie that can pay huge dividends down the road. Now, onto this week’s edition…

Jamario Moon, SF, Toronto Raptors: Thanks to an average of 10.2 points, 6.9 rebounds, 1.8 blocks, 1.8 assists and 1.6 steals through nine games in January, Moon is the first among those featured in Next Generation to receive back-to-back acclaim among the rising. Moon earned this week’s nod thanks to the damage he’s done on the court over the last two games – nine points, five rebounds, five steals, and three blocks vs. the Hawks on Friday, followed up by 17 points, nine rebounds, two steals and one three-pointer against the 76ers Saturday.

I still believe, as I mentioned in my first article, that Moon will be the most consistent rookie contributor overall behind Kevin Durant throughout this season. Perhaps he will receive some much-deserved recognition after he wins the slam-dunk contest during All Star weekend in New Orleans.

Sean Williams, PF, New Jersey Nets: My beloved New Jersey Nets are sinking faster than Jessica Simpson’s “acting” career, but you can’t fault Sean Williams. The man known as “Area 51” is still inconsistent, but his minutes are no longer a concern and he has a firm hold on a starting role. In a thrilling overtime loss to the Clippers on Saturday, Williams scored 11 points and grabbed 11 rebounds while blocking six shots and giving Chris Kaman fits all night long. With an average of 11.8 PPG over his last four, along with 6.25 RPG and 2.75 BPG, Williams is beginning to earn the trust of fantasy owners again.

Kevin Durant, SF, Seattle Supersonics: Last night, Durant turned in his third straight game rife with dreadful shooting, scoring only 12 points on 4-for-13 shooting (he’s now only 14-of-52 over this span). In fact, the month of January has been particularly unkind to Durant. He’s shooting 38.1 per cent from the field over those 10 games, and just 23.5 per cent from long distance. He’s scored only 18 points over his last two games, and he seemingly has hit the wall more suddenly and viciously than Pamela Anderson. If you can ride the waves of inconsistency with KD, your patience will ultimately be rewarded down the road.

Juan Carlos Navarro, PG, Memphis Grizzlies: How do you reward someone who averages 22.7 PPG, 4.0 RPG, and 4.3 APG with 1.0 SPG over his last three games? Naturally, you demote him to the bench in favour of Darko Milicic. Going into last night’s action, Navarro sank five three-pointers per game over the last five, but with the Grizzlies managing only one victory in that span, head coach Marc Iavaroni decided to tinker with the Grizzlies’ starting lineup, leaving fantasy owners of La Bomba to pay the consequences.

On Monday, Navarro played as many minutes as Milicic (16) in a Grizzlies victory over Chicago. JCN only scored nine points, all coming on treys, but it appears as if he only has value in the event that Milicic or Paul Gasol miss time. He’ll still contribute from long range, yet his overall numbers will significantly decline in limited minutes.

Jeff Green, SF, Seattle Supersonics: Hold on – we may have something here. A small sample size notwithstanding, The Predator had a game on Monday that bears watching for a couple of reasons. First, he played a total of 35 minutes. Second, he took more shots than did any of the Seattle Supersonics – no small feat when you play alongside Durant and Wally Szczerbiak. All in all, Green’s line consisted of 15 points on 7-of-17 shooting from the floor, along with four rebounds and four assists. With Durant struggling mightily, Green may get a chance to assert himself and give fantasy owners a better idea of what he can do. Be advised to add him to your team now while his value may still be low and you will reap the rewards, as Green has the rare ability to contribute in multiple categories and that’s just what he will do as the season progresses.

By Steve Simon
This entry was posted on Tuesday, January 22nd, 2008 at 12:14 pm and is filed under BASKETBALL, Next Generation, Steve Simon. You can follow any responses to this entry through the RSS 2.0 feed. You can skip to the end and leave a response. Pinging is currently not allowed.