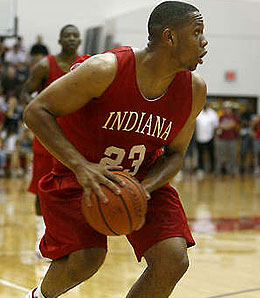 It’s been a while since the Hoosiers enjoyed a freshman stud like Eric Gordon.

The University of Indiana has long been a powerhouse with great coaches such as Bob “@*FD&@” Knight. But it has been a long time since the Hoosiers had a freshman star like Eric Gordon. The Indianapolis, Indiana native is letting NBA scouts know of his amazing ability to score, pouring in 22.4 points per game. But the 6’4″ guard is showing he is more than a scorer, as he is hauling down a respectable three boards a game and averaging just over one steal per game too.

This offensive juggernaut, unlike many current NBA stars (that’s you, Ricky Davis) is proving he can affect the game in more ways than simply offensively. Gordon has scored in double digits every game this season, leading his Hoosiers to a 16-1 record and No. 8 ranking for Wednesday’s showdown versus Big-10 rival Iowa. Gordon is clearly a natural shooter, as he’s shooting nearly 50 per cent from the field and 85 per cent from the charity stripe. Look for him to follow the footsteps of last year’s one-and-done players and bolt to the NBA as he appears destined to be a high lottery pick, barring an injury.

This will be my only cop-out tie, I promise. But it was just too hard to choose between the Drake Bulldogs (ya, I know, who?) and the Washington State Cougars.

You’re right, I do have a slight bias to the Cougars, and you might be wondering why they are so important after beating Oregon State University (whose coach, Jay John, was just fired) and the University of Oregon, since these were two teams they should have beat. Well, the Cougars had not beaten the Ducks of Oregon in 13 tries, dating back to 2001! That’s a streak worth mentioning, and a monkey that Head Coach Tony Bennett is glad to have off his back (no more does he have to sing about leaving his heart in Eugene). The 16-1 and sixth-ranked Cougars head down to the desert this week to take on the Sun Devils of Arizona State and the Wildcats of Arizona. If senior guard/forward Kyle Weaver continues to put up lines like he did against the Ducks (16 points, six rebounds and eight assists) he could give himself a chance to catch on with a NBA squad next season.

As for the Drake Bulldogs (or based on the looks of their uniforms, the Baby Blue Devils), they are currently 16-1 with wins over Iowa and Iowa State. It’s an exciting time for the team, as the last time the Bulldogs made the big dance was in 1971. They currently have an RPI of 14 and are leading the underrated Missouri Valley Conference. The Bulldogs have no clear cut NBA prospects, although guard Leonard Houston and his 15 points per game has an outside shot of being a second round pick in the upcoming NBA draft.

The Bulldogs face the unfortunate task of trying to dethrone the Tigers on Saturday. Can the Zags’ Matt Bouldin heat up and shoot his way to an upset of Memphis or will the Tigers, led by uber NBA prospect Chris Douglas-Roberts, crush the Bulldogs hopes and dreams?

By Daniel Olson
This entry was posted on Wednesday, January 23rd, 2008 at 2:38 pm and is filed under BASKETBALL, Daniel Olson, The Bench Warmer. You can follow any responses to this entry through the RSS 2.0 feed. You can skip to the end and leave a response. Pinging is currently not allowed.