Ice Chips: Is the Season Half Empty or Half Full? 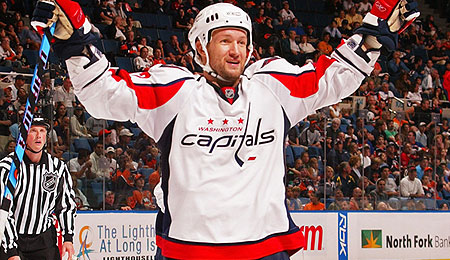 Thanks to rotator cuff surgery, Michael Nylander won’t be doing too much celebrating in the near future.

With the All-Star game rapidly approaching, the season is only becoming more volatile. While I’m not a huge fan of All-Star games, since it’s mostly an academic exercise, I do love the movement and excitement that accompanies hundreds of NHL players realizing the season is half over.

The Washington Capitals are once again hoping to claw their way into the playoffs. It won’t be easy with Michael Nylander out for the rest of the season (rotator cuff surgery). Nylander was the team’s second-leading point producer with 11 goals and 26 assists over 40 games. Interestingly, the second-leading goal-scorer is defenseman Mike Green, who’s managed to put up 14 goals and 14 assists this season (and who’s on a three-game goal-scoring streak). And despite that, the Washington announcers still refuse to punctuate each goal with a “Great Gonchar’s Ghost!” call. It’s just not fair.

Another thriving defenseman is Andrei Markov of the Montreal Canadiens. He’s put up 11 goals and 21 assists this season, with six of those goals coming on the power play. It’s been a seamless transition for the Habs, who lost offensive defenseman Sheldon Souray to free agency during the offseason. And maybe that was a good thing. Souray has just three goals and seven assists this season. You kind of have to wonder if the steady stream of canon shots coming from the Montreal blue line is more a result of coach Guy Carbonneau’s coaching than the individual player. Something to remember if/when Markov leaves.

That gasp you heard? That’s the Ottawa Senators realizing Dany Heatley is out for the next four-to-six weeks with a shoulder separation. What happens when a one-line team loses a third of that one line? Either Jason Spezza or Daniel Alfredsson shoulder even more of the load (hopefully their shoulders won’t separate), someone else steps up, or the Senators just implode. Randy Robitaille, who’s never had a 15-goal season, has spent some time on the top line. Is this the year he explodes? Hint: Probably not. But he had a goal last night against Carolina.

Speaking of emerging, Flyer Scott Hartnell has just 12 goals and 11 assists on the season. Not very impressive, right? Consider that six of those goals and three of those assists came in the first half of January. Hartnell, who signed a long contract with the Flyers this summer, is either getting comfortable in the City of Brotherly Love, or is scared his teammates will attack him unless he starts scoring. Either way, he’s a good guy to watch.

Over in Edmonton, goalie Dwayne Roloson, whom the Oilers rode to the Stanley Cup finals in 2006, has been benched, with the white hot Mathieu Garon named the starter. While Roloson will surely get some work, Garon is the horse coach Craig MacTavish wants to ride into the postseason. Of course, Edmonton doesn’t seem destined for the playoffs right now, so it might be a short ride.

Meanwhile, one-time Edmonton goalie Curtis Joseph signed a one-year deal with the Calgary Flames, where he’ll back up Miikka Kiprusoff. While Kiprusoff’s reputation has always been that of a slow starter, the Flames have to wonder if his uneven play will improve before the season ends. Still, it’s probably a long-shot for CuJo to grab the starting job.

By Steven Ovadia
This entry was posted on Friday, January 18th, 2008 at 10:24 am and is filed under HOCKEY, Ice Chips, Steven Ovadia. You can follow any responses to this entry through the RSS 2.0 feed. You can leave a response, or trackback from your own site.