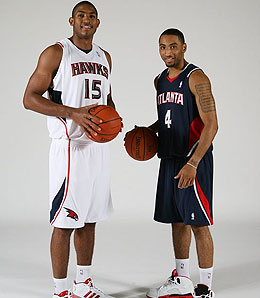 Al Horford, left, is becoming a beast on the boards lately.

This installment of Next Generation focuses on one Bulls bad boy (making Dennis Rodman smile), one high riser, one rebounding machine, and two future studs hitting a rough patch. Without further ado…

Jamario Moon, SF, Toronto Raptors: Moon, like Al Horford, enjoyed a successful week for a multitude of reasons. For starters, Moon was selected to participate in the slam dunk contest during All-Star weekend. Moon, who first dunked in the sixth grade, additionally received a recent spike in minutes and he has not wasted the opportunity. He’s averaging 40 MPG over his last four contests, while contributing added 10.0 PPG, 8.3 RPG, 2.5 BPG and 1.0 SPG over that span. The scoring will be inconsistent, but he will add plenty in other categories, particularly blocks, to be a relevant rookie fantasy contributor.

Al Horford, PF, Atlanta Hawks: What a week for Horford. Not only was he chosen by Midway Games to grace the cover of NBA Ballers, but he did some ballin’ of his own. Over his last four games, Horford has averaged a whopping 14 rebounds, including a career high 19 boards in an overtime loss to Washington. As Horford continues to learn, the second half of the season should feature considerably more games like the one he had against Cleveland, scoring 10 points and grabbing 15 boards, along with two blocks.

Kevin Durant, SF, Seattle Supersonics: Last night’s 6-for-26 shooting line comes off the heels of perhaps Durant’s worst week in the NBA thus far. In last week’s two-game stint, KD shot 33 per cent from the floor, grabbed a grand total of five rebounds, and did not register a three-pointer. Perhaps the twisted ankle he suffered against Cleveland on Tuesday is partly to blame, maybe he is tiring from carrying the scoring load, or he could just be lovesick. After last week’s game against the New Jersey Nets, Durant said of one famous spectator, “I was just staring,” at Beyoncé, whom he says is his favorite celebrity. “Somebody had to come over and say, ‘K.D., come on.’ The whole game I couldn’t look over there because I was going to stare at her the whole time. I really love her.” Alrighty.

Yi Jianlian, PF, Milwaukee Bucks: The reigning Eastern Conference Rookie of the Month averaged 12.1 points and 6.6 rebounds in December. January, however, has not been as kind to Yi. The former Guangdong Southern Tiger has hit a rough patch – over his last five games, he has shot 33.3 per cent from the floor, averaged 7.0 PPG (in three of those games he scored two, four, and six points respectively), and grabbed 3.4 RPG. Last night’s line of six points and three rebounds on 2-for-8 shooting has become the norm of late for Yi, who has only cracked double-digits in scoring twice over his last seven games.

Joakim Noah, PF, Chicago Bulls: On the surface, given Noah’s two-game suspension for telling off assistant coach Ron Adams and his difficulties with punctuality, one might assume Noah’s stock has taken a nosedive. However, I have a hunch that this may reverse the steady decline that has defined Noah’s rookie season in the NBA. Perhaps he needed a wakeup call such as this to get him going, and maybe his inconsistent playing time was a result of his behaviour behind the scenes. If Noah can prove to the coaching staff that he has come away from this debacle with a lesson learned, perhaps he will finally receive the minutes that he will need to ultimately have some value. This next week or two will be critical to see how Noah responds.

By Steve Simon
Tags: Jamario Moon
This entry was posted on Tuesday, January 15th, 2008 at 1:29 pm and is filed under BASKETBALL, Next Generation, Steve Simon. You can follow any responses to this entry through the RSS 2.0 feed. Both comments and pings are currently closed.