The Bench Warmer: A Whole Lotta Love for Bruins 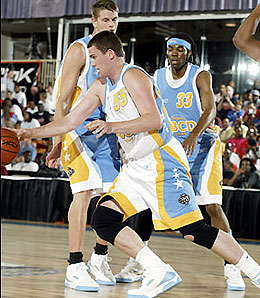 Kevin Love is tearing it up for the Bruins. (Photo: CNNSI)

Welcome to the debut of The Bench Warmer, RotoRob’s newest column by our newest writer, Daniel Olson. Each week, Daniel will bring you the latest news from around the world of college basketball. Without further ado, let’s get to it.

While most are not surprised by UCLA’s 16-1 start, people have to be a little shocked at how easily it handled Washington State in last Saturday’s matchup at Pauley Pavilion. The biggest reason the No. 5-ranked Bruins defeated the fourth-ranked Cougars so easily? Simply put, freshmen sensation Kevin Love.

Love, from Lake Oswego Oregon, was completely unstoppable for the Bruins, scoring 27 points (a new career high) while also pulling down a mammoth 14 rebounds. The 14 rebounds were two – that’s right, two – less than the entire WSU team! To go along with his brilliant offensive performance, Love completely flustered and shut down Cougar centre Aron Baynes, a feat that had not happened to date.

While Love might not have the voice of Beach Boys member and Uncle Mike Love, odds are he will be getting a paycheque similar to his famous relative sooner rather than later. While Bruin fans wish for four years out of the star, they might be California Dreamin’. The 6’10”, 271-pound Love already has an NBA body as well the natural smarts to succeed at the pro level. As long as he stays relatively injury free, chances are he will bolt out of Westwood and head to the pros. Look for Love to be a high lottery pick come draft time.

This game features Southern California’s finest freshmen in USC’s O.J. Mayo and UCLA’s Love. While UCLA is having the better year, don’t be surprised to see Mayo have a monster game as his Trojans attempt an upset against Love’s Bruins and try to re-emerge as contenders for the Pac-10 championship.

By Daniel Olson
Tags: Kevin Love, UCLA Bruins
This entry was posted on Wednesday, January 16th, 2008 at 5:02 pm and is filed under BASKETBALL, College sports, Daniel Olson, The Bench Warmer. You can follow any responses to this entry through the RSS 2.0 feed. Both comments and pings are currently closed.