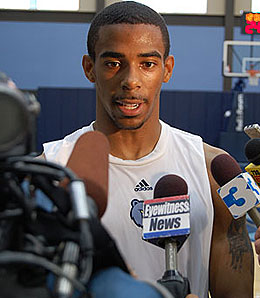 Mike Conley Jr. is starting to get plenty of attention. (Grizzlies.com)

Welcome back for the first Next Generation of 2008. To ring in the new year, the rooks put together an exciting video for my readers that will amaze and at the same time repulse. I don’t want to name names, but one Seattle rookie performs the worst robot of all-time.

“Guess which hand is my strong hand.” – Conley, on his Yardbarker blog.

How Did we Get Here?

As a freshman at Ohio State, Conley was the premier college point guard in the country. Conley’s Buckeyes were defeated in their quest for a National Championship at the hands of the Florida Gators despite his 20 points, six assists and four steals. A stellar performance of 16.0 points, 4.8 assists, 5.0 rebounds, and 2.0 steals in six NCAA Tournament games was good enough to convince Conley and his father/agent, the same Mike Conley, Sr. that was a 1992 Olympic Gold Medalist, to declare for the NBA Draft. Conley Jr. was selected fourth overall by the Memphis Grizzlies. Incidentally, Conley Sr. was one of the best dunkers I’ve ever seen.

Where Does he Fit on the Team?

After being mentored under Mike D’Antoni, first-year coach Marc Iavaroni has installed an up-tempo scheme. His Grizzlies opened the season with several point guards on the team, including Damon Stoudamire, Tarence Kinsey, Kyle Lowry, and Juan Carlos Navarro. While there is debate as to whether or not the current roster suits the frenetic style, Conley’s speed and decision making in an up-tempo style should suit him as well as any of the aforementioned point guard options. Ultimately, there is only one ball and tough decisions have to be made before determining who receives the lion share of minutes running the show. The fact that Stoudamire is being discussed in trade rumours fuels hope that this situation will ultimately work itself out.

By averaging 11.4 points, 5.2 assists, 3.0 rebounds and 1.0 steals per game in the Vegas Summer League, Conley proved he belongs. After averaging 5.6 points and 4.2 assists in his first five games in the NBA, Conley suffered a shoulder injury that sidelined him for the next 20 games. Upon Conley’s return, Stoudamire was placed on the inactive list. Conley has started two games and, in 34.5 MPG, has demonstrated the strengths that made him such a special player just one year ago. With steady minutes, Conley will rack up the assists and steals, as he did last season by leading the Big Ten Conference in both categories. Conley’s 51.8 FG% last season was high for a point guard, and given his speed and the ease with which he can get to the hoop and finish, the field goal category may become a strength not unlike the way it is for Tony Parker.

A majority of Conley’s shortcomings are related to poor percentages. He only shot 69.4 per cent from the free-throw line last year, while only making 30.4 per cent behind the arc. Not unlike Al Horford, Conley at times can become too willing to defer to teammates and has a tendency to be overly willing to set up teammates rather than creating opportunities for himself. He may also be battling on the Grizzlies’ depth charts for minutes, while also contending with historical data that suggests the point guard position is awfully difficult to master after just one college season. Finally, the jury is still out on whether or not Conley can put points up on the board without an outside game. The 20-year-old registered 11.3 PPG one season ago.

There is a lot to like about Conley’s game and his promotion to starting point guard for the running Grizzlies. He would appear to be the point guard to build with to implement the breakneck pace. While subjecting myself once again to Eric Reid’s awful play-by-play during Sunday’s game vs. the Miami Heat, not only did I notice how much Reid sounds like Carnac the Magnificent, but I also was able to get my first glimpse of the speedy Conley. Assuming Conley remains the starting point guard, he will average six assists in his sleep and will excel in the steals category. As he become more accustomed to the NBA, he can get to the hoop whenever he wants as long as Mike Miller and Navarro force Memphis’ opponents to spread the floor. There is also the potential to grab three to four rebounds per game given his quick reactions to the ball.

Similar to the way he grabbed the starting point guard responsibilities for the Grizzlies, I see no reason why Conley won’t do the same for fantasy basketball owners as soon as the second half of the season commences. The player that I find myself comparing Conley to is Parker, yet Conley has a greater upside. Conley should dish more assists than Parker, while finding himself among the league leaders in steals. The area in which Conley needs to improve is his outside shooting, and there’s an awful lot of work to do. Still, only six point guards in the history of the wonderful NB of A averaged 6.5 APG or more in their rookie season – Chris Paul, Stephon Marbury, Isiah Thomas, Magic Johnson, T.J. Ford, and Mike Bibby. With a trio of talented scorers in Memphis consisting of Pau Gasol, Miller and Rudy Gay, Conley has a realistic chance to join this esteemed group. Now is the time to grab or trade for him if he is available in your league. Today he is a consistent contributor in assists and steals, but with considerable experience and a summer to work on his shooting, Conley should become a fantasy stud.

His freshman numbers across the board last season are incredibly similar to those of Baron Davis’ freshman year at UCLA. They both played their rookie season in the NBA at the age of 20.

Mike Conley Jr., PG, Memphis Grizzlies: I really do like Conley as a keeper, but I also see a lot of value this year. Count on a lot of assists and steals, surprisingly nice rebounding totals, and a fine FG% regardless of his dreadful outside shooting. His last three games have him logging 35 MPG with 6.3 APG and 4.3 RPG, along with 2.0 SPG. I promise not to mention Conley again for at least a week.

Daequan Cook, SG, Miami Heat: I wasn’t kidding when I told you to keep an eye on him, and with Jason Williams and Dwyane Wade sidelined with various injuries, Cook took advantage of some extra minutes and proved that he can shoot the three. He’s earned 29.6 MPG over last five, while nailing 11 from downtown and pouring in 11.0 PPG. It does, however, remain to be seen if he earns steady minutes once the backcourt is at full strength.

Joakim Naoh, C, Chicago Bulls: I’m disappointed that I have to add him here, but he hasn’t scored in his last two games and has only been on the court for a total of 18 minutes during that time. Currently behind Joe Smith, Tyrus Thomas, Aaron Gray and Ben Wallace , the rook seemingly will need to simply wait in line.

Juan Carlos Navarro, G, Memphis Grizzlies: Conley’s return does nothing to help owners of Navarro. He’s only averaging 14.0 MPG over his last three and in two of those games he finished without a three-pointer. If he’s not hitting those, he’s virtually useless on your squad.

Keep An Eye On

Thaddeus Young, SF, Philadelphia 76ers: He will not be a secret for much longer. Compared favourably in some circles to Paul Pierce, Young has played 24 MPG over his last two and narrowly missed his first double-double in each game. He is as quick and as athletic as anyone in last year’s draft and the potential of watching him and Louis Williams develop should give Sixer fans plenty to cheer about.

By Steve Simon
This entry was posted on Tuesday, January 8th, 2008 at 11:57 am and is filed under BASKETBALL, Next Generation, Steve Simon. You can follow any responses to this entry through the RSS 2.0 feed. You can skip to the end and leave a response. Pinging is currently not allowed.