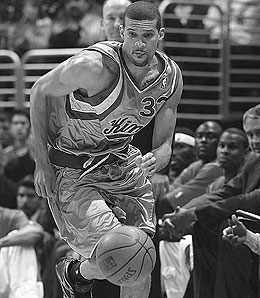 Do not consider cutting Francisco Garcia.

Happy New Year. How have you been?

I recently picked up Francisco Garcia from the Kings, but am considering dropping him for Mike Conley since I only have Joe Johnson and Mo Williams as my other point guards. Meanwhile, I do have John Salmon on the team, and he’s been playing nuts for me.

Considering the situation at Sacramento right now, should I drop Garcia for Conley?

If you cut Garcia for Conley, I want in on your league! Garcia has tons of value with Ron Artest out, and even though Conley is now startring, rookies play like rookies.

Devin Harris: His minutes the last few games have been low, anything going on there?

The problem there is a guy named Jason Terry. Terry and Harris are going to split minutes until one either gets traded or dies. The important thing is that Harris is making the most of the time he is on the court. Over the past week, he has averaged 18 points, three rebounds, 4.5 assists and 1.5 steals per game while shooting 47.4 per cent from the field. That’s pretty good for a platooner.

Thanks for the articles — we appreciate the daily advice.

I am currently weak in FT% — last, but very close to two others, and in 3PTM — middle of the pack. I just traded Emeka Okafor and Al Horford for Lewis, which helped me in both areas. I offered B. Davis and Marbury to improve my FT (and because I fear injury to Baron) for D. West and Kevin Durant. He countered with Baron and R. Davis for those two.

I like improving my FT%, and will gain a few blocks, which may help, but lose big on threes, steals, and assists, and fear I am overpaying with the best player in the trade. I know Durant is more valuable in this format, and could help offset the threes a little.

I also have an offer out there of Wade for Chris Paul (again, FT% and injury concerns, though Paul has a history as well). Do you like either trade, or should I hold out for more?

I like Paul more than D-Wade this year. CP3 is the No. 1 player in all of fantasy basketball now, so if this owner is dumb enough to deal you Paul for Wade, then take it and run!

Durant has improved him FG%, but his shot selection is iffy. If you deal for him, you will take a step down from Baron Davis. I don’t think you are getting enough in your deals.

By James Morris
This entry was posted on Monday, January 7th, 2008 at 6:34 pm and is filed under BASKETBALL, Dear RotoRob, James Morris. You can follow any responses to this entry through the RSS 2.0 feed. You can leave a response, or trackback from your own site.