Kobe Reaches 20,000 But the Rumours Persist 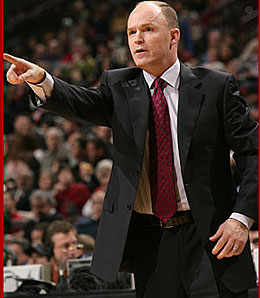 Scott Skiles paid the price for the Bulls’ lame-ass start.

Kobe Bryant needed just 20 points Sunday to become the youngest player in NBA history to reach 20,000. Well, he made it with plenty to spare, pouring in 39 points – his highest total since Opening Night – and adding 11 rebounds, eight assists, two steals and five 3-pointers in one of his finest games of the year.

Now the question is, how many more gems like this will Kobe put up in a Laker uniform?

Talk persists that Bryant will be dealt, perhaps to the Knicks. Chicago, of course, has long been rumoured as a possible destination for Bryant.

For the second straight season, Kobe’s touches are down, but what’s really hurt his scoring this year is the fact that his shooting percentage has dropped to 44 per cent after he sunk better than 46 per cent last season. His Sunday showing – 14-for-28 from the field – was sweet, but there have been too many runs like his 21-for-61 slump in the previous three games to maintain a strong percentage.

On the plus side, Bryant’s rebounding, steals and blocks are all up.

Speaking of veteran guards who may be on the move, does Scott Skiles’ firing from the Bulls open the door for Chicago to acquire Jason Kidd? Kidd, coming off his seventh triple-double of the season, has shot the ball a bit better this month, but overall he’s struggled with his accuracy this season – especially from downtown. On the flipside, Kidd’s rebounding – always a major strength – has never been better.

Of course, the Lakers have been a candidate to get Kidd seemingly forever.

Hell, we’re on a roll with veteran guards that could soon have new homes, so how about Larry Hughes? Cleveland would like to part with him, and there’s talk that Washington – desperate for backcourt help – might want him back.

Hughes has gotten progressively worse since arriving in Cleveland, and apparently has never been able to develop chemistry with LeBron James – a sure ticket out of town.

Ben Wallace is back for the Bulls, but he still sucks, going scoreless with just five boards on Saturday. Wallace’s rebounding work – especially cleaning up under the Bulls’ bucket – has declined dramatically this season.

Chicago looked to be turning things around with a 7-4 run, but after getting spanked by Boston and – gasp – Houston – Skiles is out on his ass. The Bulls are 9-16 and need a shaking up if they hope to make it back to the playoffs. A trip to San Antonio on Boxing Day won’t likely help matters.

Speaking of Eastern teams with high expectations that are flopping, Miami needs to do something quick to save its season. The Heat beat Utah, but is tied with the Knicks as the worst team in the conference.

There’s talk that Jason Williams could be dealt for Mike Miller. Houston is also interested in White Chocolate, who has failed to reach double digits in points in two and a half weeks.

He’s been healthy enough to play heavier minutes this year, not that Miami has much in the way of options to spell Williams. Having said that, although he’s shot decently from long distance, Williams’ touches are down this year, rendering him as a very low-level fantasy option.

As for Miller, he’s been playing seriously heavy minutes of late, and has picked up his scoring with 19.4 PPG in the past five games. He’s a top notch free-throw shooter and, as always, is deadly from outside. A move to the Heat would really boost his value.

By RotoRob
This entry was posted on Tuesday, December 25th, 2007 at 12:37 pm and is filed under BASKETBALL, RotoRob, Rumours. You can follow any responses to this entry through the RSS 2.0 feed. You can leave a response, or trackback from your own site.