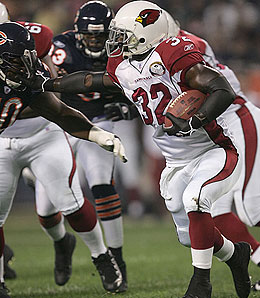 Edgerrin James has helped the Cardinals make modest improvements in their running game this season.

The Arizona Cardinals, those perennial doormats, have a chance with a win this weekend against the reeling Rams to finish with their first non-losing since 1998, when they went a lofty 9-7.

Okay, it’s not exactly a major turnaround or reason for a parade, but this team has definitely made some nice strides since finishing dead last in the NFC West last year with a 5-11 mark

Most of the club’s gains have come on the offensive end, where the 18th-ranked offense of a year ago, has risen to a decent 11th. The passing game, already strong last year at 10th, has improved even more, currently ranking sixth in yards per game. Even the woeful rush attack – 30th a year ago – has shown modest improvement, rising to 29th (well, it’s something, anyways).

That the pass attack has improved as much as it did has been a very pleasant surprise for a club that lost Matt Leinart after just five weeks to a fractured collarbone. After a very promising rookie season, Leinart was expected to continue his development as one of the best young QBs in the game this season. However, he was struggling early and the injury ended any chance of his recovery.

Enter veteran Kurt Warner, who stepped in and saved the Cards’ bacon with a fantastic performance. Although his yards per completion has slipped and he’s had troubles with interceptions, Warner has proved he is not ready to sail off into the sunset just yet.

Wide receiver Larry Fitzgerald has bounced back brilliantly after a sub par 2006. He’s currently fifth in the NFL in receiving yards despite the fact he hasn’t had a really big game since Week 12 and missed Week 13 with a groin injury that has dogged him since.

On defense, perhaps the club’s best off-season acquisition was cornerback Roderick Hood. He had a big preseason, winning a starting gig and going on to enjoy a career season.

While this team headed into the campaign looking green – especially with Leinart at the helm — they’ve managed to show progress. And assuming Leinart can bounce back next year and take the next step up, Arizona could again return to a winning record and perhaps even sneak into the playoffs.

By RotoRob
This entry was posted on Monday, December 24th, 2007 at 6:44 pm and is filed under FOOTBALL, RotoRob, Team report. You can follow any responses to this entry through the RSS 2.0 feed. You can leave a response, or trackback from your own site.