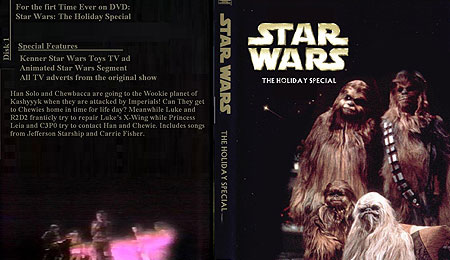 The world would be a better place if the Star Wars Holiday Special were appreciated as the classic that it is.

On this Christmas edition of Next Generation, I am suffering from slight basketball withdrawal and way too much time on my hands in view of Monday’s blank NBA schedule. As a result, I’ve thought long and hard about my top five unappreciated Christmas specials that need to be shown more often every holiday season. They are, in no particular order, The Star Wars Holiday Special, Fat Albert’s Christmas Special, Santa Claus is Comin’ To Town, and The Year Without a Santa Claus, that classic from 1974. However, no list of Christmas specials would be complete without the Riverbottom Nightmare Band in Emmit Otter’s Jug Band Christmas.

Enjoy the holiday season and if you’d like a jump on your competition, read on.

“Sweeeeet Emotion” – Aerosmith.The Bucks play this song every time Yi scores because “Sweet” rhymes with Yi (pronounced Eee). Get it?

How Did We Get Here?

The Guangdong Tigers, Yi’s former team in China, announced in November 2006 that he would be released and made available in the 2007 NBA Draft. Chinese documents listed him as being born in 1987, but trusting Chinese government officials with age documentation is as good of an idea as is trusting Lynne Spears with parenting advice. Why? Because, you know, they admit to doing so. While it’s not quite Danny Almonte territory, it does make it more difficult to accurately gauge Yi’s progress in his rookie season as well as his long-term potential.

Of course, he’s doing pretty well in the celebrity department; Yi already had his own Nike commercial in China before being selected with the sixth pick in the draft by the Milwaukee Bucks.

Where Does He Fit on the Team?

Rumours abound that the Bucks had guaranteed Yi anywhere between 20 and 25 MPG in his rookie season, although not surprisingly no one from the Bucks’ organization would confirm the promise. Also not confirmed – that MTV’s The Hills is fake. But, c’mon.

With minutes comes the impression that the power forward position is his to lose. While perhaps Yi is more suited initially to play small forward, the Bucks already have Desmond Mason and Bobby Simmons. Reducing Charlie Villanueva to a bench role makes their trade to acquire Charlie V. for T.J. Ford look downright appalling (more than it already does; but certainly Ford’s long-term situation and his pondering of retirement will take the sting out of this deal to an extent).

Arguably the fastest 7-footer in the NBA with agility and athleticism that most big men dream of having, Yi is fundamentally sound and owns a fluid jumper with the ability to make wise decisions with the ball. Yi runs the floor extremely well and boasts explosiveness when finishing around the basket. Most importantly, Yi has been able to earn significant minutes. While logging 27.9 MPG thus far and 36 minutes per game in his last five, there is ample opportunity for him to make an immediate contribution for fantasy basketball owners. Yi should contribute in the categories of points, rebounds, FG% and FT%. Additionally, thanks to his 7’4″ wingspan, his steals and rebounds contributions should continue to rise as he becomes more accustomed to the NBA.

Similar to Kevin Durant, Yi is a scorer who currently lacks the physical strength to play closer to the basket. His offensive repertoire consists of working with the ball on the perimeter. Therefore, he is typically waiting for one of his teammates to drive and dish and the Bucks are not great at sharing the ball. Either his teammates aren’t comfortable trusting him yet or he doesn’t get his number called often by Coach Larry Krystkowiak. Getting the ball on the perimeter can be a daunting task while playing alongside Michael Redd and Mo Williams. Case in point – on Saturday, Yi began by hitting his first 12 shots on his way to 29 points and he still took a back seat to Redd and Williams in shot attempts. His lack of strength may limit his rebounding totals and, in conjunction with his inability to comfortably put the ball on the floor, he could have a difficult time drawing fouls and taking advantage of his 81.7 FT%.

Evidently, Yi’s hard work is paying off. Coming off of a career-high 29 points and his first career double-double, Yi just completed a five-game stretch in which his numbers were eye-popping: 61.8 FG%, 100 FT%, 16.4 PPG, 8.0 RPG, 1.4 BPG and 1.2 SPG. With an injury expected to keep Mason sidelined for six-to-eight weeks, it’s a safe assumption than perhaps more minutes and shot attempts will go to Yi.

If for some reason it’s not too late to grab him in your league, do so immediately as Yi has fantastic long-term keeper value. Athletic 7-footers with precision from the outside don’t come around often, and, the potential is there for Yi to contribute in virtually every category. For this year, if the last three weeks are any indication, Yi will do his best to give Durant a challenge for Rookie of the Year honours. His numbers across the board during that timeframe compare quite favorably with those of Zydrunas Ilgauskas (see below).

Whether he can sustain this pace or will experience the highs and lows virtually every rookie encounters is anyone’s guess, but I would (and have) add him and, at the very least, reap the long-term benefit.

Sean Williams, C, New Jersey Nets: “Le Freak Elastique” has been freed! Inserted alongside Josh Boone into the Nets’ starting lineup on December 18, the amount of minutes he plays is now in his hands rather than Lawrence Frank’s. Staying out of foul trouble has posed a problem for Williams, but when he’s on the court he will produce. Over the last week, he played 22.7 MPG and tallied 3.7 BPG, which included an eight-block game against Sacramento. After recording their first back-to-back victories since November 23 and 25, the Nets figure to let Williams remain a starter and his production should continue to rise as long as that is the case.

Corey Brewer, SF, Minnesota Timberwolves: Caution – playing Brewer in your active lineup may cause frustration. Brewer was a hot pickup after cleaning glass to the tune of 18, 11 and nine rebounds in three consecutive games. While it may be tempting to play him given the 32.2 MPG he played last week, he shot only 35 per cent from the floor and scored 7.5 PPG. With Marko Jaric and Rashad McCants nearing a return from flu-like symptoms, Brewer’s minutes should dwindle, as should any hopes of him making an immediate contribution to fantasy owners.

Luis Scola, PF, Houston Rockets: Last week I suggested monitoring the playing time of Al Thornton due to injuries on the Clippers, and he responded with 25 points in 43 minutes against the Spurs on Saturday. Similarly, I’m monitoring the situation in Houston in which Tracy McGrady has been slowed by problems with his knee. More minutes in the frontcourt seem to suit Scola just fine, where in his last two games he is averaging 16 points and 10 boards in 26 MPG while shooting 56 per cent from the floor.

By Steve Simon
This entry was posted on Wednesday, December 26th, 2007 at 1:46 pm and is filed under BASKETBALL, Next Generation, Steve Simon. You can follow any responses to this entry through the RSS 2.0 feed. You can skip to the end and leave a response. Pinging is currently not allowed.