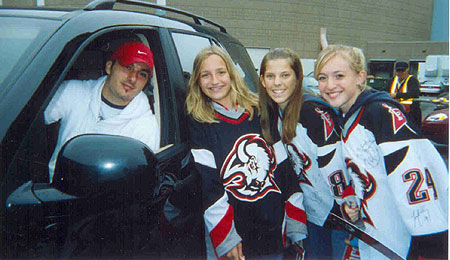 If he steers clear of the Sabre skanky groupies in training, perhaps Ales Kotalik will set a career high in goals this season.

Buffalo is blazing with six straight wins, the past two coming in a sweep of a home-and-home series against the Flyers – a team headed in the absolute opposite direction with a season-worst six straight losses.

The Sabres’ hot streak has them breathing down the Habs’ and Bruins’ necks, just a point out of second place in the Northeast with a game in hand.

Philly, meanwhile, has dropped into a share of third place in the Atlantic Division, having played the same amount of games as the Isles, but with one in hand against the Penguins. Of greater concern, the Flyers have slipped out of the playoff picture, and with the Leafs suddenly playing better, Philadelphia could be in trouble.

For Buffalo, Ales Kotalik scored in both wins over the Flyers, giving him 11 goals for the season and putting him on pace for a new career high.

Flyers’ goalie Martin Biron is getting shell shocked lately, with 16 goals against over the past four games. Biron was superb in October, but has definitely slipped since then, although his overall numbers remain strong.

What worries me about the Flyers’ recent struggles is that they are losing at home. After opening the year on a 6-0 roll at the Wachovia Center, they have now lost nine of their past 10 home games. Perhaps a six-game road trip beginning Saturday will actually be a good thing.

Whatever they do, this team needs to avoid shootouts. The Flyers are 0-3 this season when failing to decide things in overtime.

At least Mike Richards continues to scorch. He had two goals and an assist last night, and is already up to 105 shots on goal after managing just 130 all last season.

Buffalo, meanwhile, started the season 6-10-1, but has won 13 of 17 since then. In a great sign, Maxim Afinogenov is starting to rediscover his form from last season. He had a goal and an assist last night, giving him three goals over the last five games.

The Leafs got some of the bad taste out of their mouths with a big 2-1 overtime win over Florida. Toronto had dropped its past two games in ugly fashion.

Pavel Kubina’s first goal since late-October was the winner. In fact, Kubina hadn’t had any points in four games prior to last night and with a -3 over his previous three games, he needed to contribute. He now has 15 points in 26 games after managing just 21 points in 64 games last season.

Richard Zednik’s horrible December continued for the Panthers. It was his penalty that led to Kubina’s winner. In 10 games this month, Zednik has just one goal and two assists. He’s getting pretty good ice time but is a -5 on the year and should be ditched even in deeper leagues at this point.

Toronto is now 2-2-1 in the first five games of a seven-game road trip, but really should be 4-1 had it not completely blown games vs. Carolina and Tampa Bay.

For the Leafs, Kyle Wellwood finally bulged the twine, his first goal in 12 games and just his fifth of the season. Wellwood is scoring on 18.5 per cent of his shots, so maybe he ought to fire a few more discs at the net.

Florida had won three straight games to move over .500 and put some pressure on the first-place Hurricanes in the Southeast. But the Panthers need to look out below too, and face a very tough game in Atlanta next.

Speaking of Atlanta, it beat the Canadiens in a shootout last night to earn a third straight win. The Thrashers are poised to move past the Panthers if they continue this current roll. But this is about as inconsistent a club as there is. Atlanta dropped four straight before turning things around last week, but it faces a tough Blues squad in St. Louis tonight.

Slava Kozlov scored in the shootout for the Thrashers, but was shut out in regulation and is stuck with 10 goals in 35 games, a disappointment for his owners who were hoping that Kozlov might be able to reach 30 goals this season. He’s a -5 and is being dropped in the lion’s share of leagues these days.

Atlanta is now 4-1 in shootouts – perhaps the Flyers need to take some lessons from this team.

Montreal, meanwhile, had a four-game winning streak snapped and has dropped to 2-5 in shootouts. The Habs’ recent success vaulted them into a share of second place in the Northeast with Boston, but with Buffalo charging hard and with Montreal playing in Dallas tonight, the Habs could slip in the standings very quickly.

Alexei Kovalev scored his 15th goal of the year for Montreal, and he’s got a goal and two assists with a +1 ranking in his last two games. He’s on pace for 35 goals this season, which would by far represent his best year in a Habs’ uniform. Kovalev is now owned in virtually every single fantasy league.

Cristobal Huet was playing in his second game in the Montreal net since returning from a pulled groin. His previous mastery over Atlanta – 3-1 over the last four games – ended, despite a solid 26-save effort. He’s lowered his GAA to 2.30 with a pair of strong games and looks to have solidified his status as the No. 1 man in Montreal. He’s healthy, so makes a strong pickup on the off chance he is unowned in your league.

No, he’s hardly a fantasy stud, but Richard Park notched his goal of the season in OT last night, giving the Isles a win over Washington. Park is on pace for 14 goals, which would match his career high. The fact that he’s moved from the fourth line to the top line suggests that he could be a second-half sleeper.

Capital defenseman Mike Green, who’s been a strong pickup lately, was the goat, giving up the puck that led to the winning goal. He’s dropped to -5 on the season, but with 15 points in 36 games, he’s enjoying a breakout season offensively.

For the Islanders, Miroslav Satan has had a very disappointing season, but he looks like he might be getting back on track with goals in his last two games. He’s only scored 10 times in 34 games, but it’s a start. Satan was a much better player in the second half last year, so perhaps he’s going to get hot after the break again. Most owners have dropped Satan, so be prepared to make a claim if you think he will keep it up.

Alexander Semin, slowed earlier this year by an ankle injury, appears to finally be getting his act together with goals in three straight games. He was invisible for most of the season, but now has five goals in 19 games and is rewarding his owners, who have patiently awaited the return of the sniper who potted almost 40 goals for the Caps last year.

The Islanders have slipped this year, but imagine how much trouble they’d be in if they weren’t 6-2 in the second half of back-to-back games. They need to bring that kind of energy every night if they hope to get back to the playoffs this season.

By RotoRob
This entry was posted on Sunday, December 23rd, 2007 at 7:38 pm and is filed under Fantasy Notes, HOCKEY, RotoRob. You can follow any responses to this entry through the RSS 2.0 feed. You can skip to the end and leave a response. Pinging is currently not allowed.