The Wire Troll: Is Charlie Ringing Your Bell? 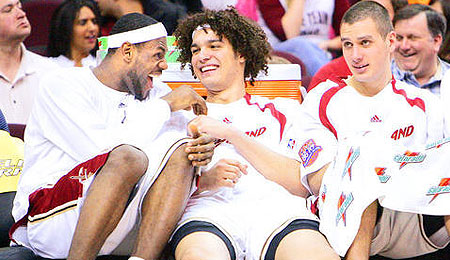 His Cav teammates are stoked to have Anderson Varejao (middle) back. (AP)

Well, another week has passed and we’ve got another T.J. Ford injury which has put his career in jeopardy; Anderson Varejao is back to playing solid games, and Chucky Atkins has been the talk of the town in most leagues’ FA pool. So, where does that leave you and what you should do? Well, listen to me, follow my advice and you will live long and prosper!

Charlie Bell/Bobby Simmons: Desmond Mason is expected to miss six-to-eight weeks, so that means either Bell or Simmons will step into the starting role with the other one seeing a boost in minutes. I am going to bet more on Bell becoming the starter (and he did do just that Saturday) with Simmons, the former NBDLer, coming off the bench. I wouldn’t go dumping someone that is doing well, but Bell might be a good gamble if you are holding a Charlie Villanueva.

Nazr Mohammed: Mohammed is now with the Bobcats and has been one of the top FA signings in the leagues I am in. I think he is able to get a double-double on any given night, therefore, I would snatch him now! Keep him or offer him for trade to someone that needs a centre. You can’t ever have too many double-double centres. Mohammed continued his fine scoring run last night with 14 points.

Eric Dampier: If you need a centre really, really, really badly, Dampier is out there in most leagues. He will only get you about five points a game, but he will also grab around seven boards and two blocks per game. If Mohammed is already gone and you need a big man, give Dampier a try. Just don’t expect too much, although his line on Wednesday — 10 boards, two steals and five blocks — sure was sweet.

Anderson Varejao: He is playing okay, but not well enough to start him right now. I would say you can pick him up and stash him on the bench, but I wouldn’t give up too much to get him. Sideshow Bob enjoyed a big night Thursday, scoring 11 points and pulling down a game-high 15 boards.

By James Morris
This entry was posted on Sunday, December 23rd, 2007 at 3:48 pm and is filed under BASKETBALL, James Morris, The Wire Troll. You can follow any responses to this entry through the RSS 2.0 feed. You can skip to the end and leave a response. Pinging is currently not allowed.