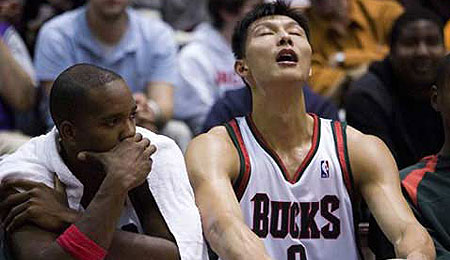 The way Yi Jianlian, right, has been tearing it up the past few games, he won’t have time to nap on the bench anymore.

Welcome back to Next Generation, where we take a look at one rookie each week and provide in-depth analysis. We’re also keeping a close eye on which first-year players are worthy of a roster spot on your team, both now and down the road. Forecasting success or failure for NBA rookies is fairly difficult to do, considering playing time is often dictated by coaches that usually can’t bear to play mistake-prone freshmen.

It was an eventful week for rookies. Kevin Durant dropped 30 points in his first game at MSG, Yi Jianlian put together his finest week thus far, and both Juan Carlos Navarro and Al Thornton found themselves additional minutes with which to play.

However, some negative attention was given to the player in this week’s spotlight – Al Horford. Because of his flagrant foul on T.J. Ford, Horford has been treated as poorly this week as L.C.’s fat friend on The Hills that doesn’t even receive the respect of having her name displayed. Far be it from me to extol the character of Horford when the Atlanta Journal Consitution has it covered.

I did want to add, however, that I was watching the game live and at no point did there seem anything remotely malicious about Horford’s foul. Ford slowed down and then cranked it up to another gear and Horford swiped at where he thought the ball was going to be. Given the notable size difference between the two, this happened. In slow motion it looks a lot worse, but the live version clearly shows the intention of a clean play with unfortunate consequences.

How Did We Get Here?

Widely seen as the second best big man in the 2007 NBA draft behind Greg Oden, Horford was selected third overall by the Atlanta Hawks. Horford and his Florida Gators had recently celebrated back-to-back NCAA titles after defeating Ohio State. In his last collegiate game, Horford scored 18 points and grabbed 12 boards while “limiting” number one draft pick Oden to 25 points.

Where Does He Fit on the Team?

Horford’s Gators consisted of talented teammates that could provide scoring relief at every position on the court. Likewise, the Hawks have several scoring options that will allow the youngster to settle in gradually. Additionally, with no true point guard ready to take hold of a starting role, Horford may have a difficult time seeing the ball at all alongside Joe Johnson and Josh Smith. Horford figured to focus on defending and rebounding — and after the Hawks finished third to last in field goal percentage one season ago, there figured to be plenty of boards to snatch.

Much like fellow freshman Durant, Horford had an opportunity to start right from the season’s opening tip even after the Hawks recently drafted forwards and swingmen Sheldon Williams, Josh Childress, Marvin Williams and Josh Smith. Horford provides Atlanta with a big body in the middle that would be counted on to slide over to centre and defend the post. Because Horford is blessed with an exceptional basketball IQ and anticipation skills, as well as a chiseled frame and extraordinary strength, I expected him to be able to contribute in the blocked shots, steals and rebounding categories.

In college, Horford was known to defer to teammates on the offensive end. Combine this trait with his limited post moves and somewhat restricted shooting range, and even Isiah Thomas could predict that points would be hard to be come by for him on this team. Furthermore, his aggressive style of play and the potential to spend some time at centre could lead to limited minutes due to foul trouble. Horford’s three seasons in college provided little reason to be optimistic that he would excel in free-throw shooting, shooting it at a 61.4 per cent clip during his collegiate career.

In 31.5 MPG, Horford is scoring 9.0 PPG and snaring 9.9 RPG. Horford’s strengths and weaknesses are exactly the opposite from those of the player I featured last week – Durant. While the brilliance that is Durant’s offensive game is far ahead of his strength and rebounding, Horford’s scoring needs to catch up to his brute strength and ability to clean glass. The opportunity and minutes are there, and that does not figure to change. The blocked shots have been tailing off recently, but his current average of 1.1 BPG is a nice bonus for a rookie.

Currently, double-digit rebounds is the only thing Horford can be depended on for. I don’t expect his offensive repertoire to develop anytime soon. His touches might increase if he had a legitimate point guard running the floor alongside him, but that guy is not currently on the roster.

Tyson Chandler, in a down year thus far.

For the short term, the Hawks made a solid selection with Horford. That’s right, the same organization that passed up Chris Paul for Marvin Williams happened to make a fine choice this time around. The expectation, however, should be for Horford to complement the talent with which he is hopefully surrounded. Finding himself surrounded by players that love to shoot, his looks will be hard to come by and that may be a good thing – his shot beyond six feet is just plain ugly. Horford’s footwork in the post also needs a lot of work and his size isn’t necessarily the strength that it was in college.

I’m going to give him the benefit of the doubt and assume he grabs at least 8.5 RPG for the season and is able to maintain or slightly improve upon his scoring average. Owners of Horford have to hope that the similarity between his current statistical line and that of J.R. Reid’s rookie season is purely coincidental. Reid, you may recall, went on to average a paltry 8.5 PPG and 5.0 RPG over the course of his 11-season career.

Yi Jianlian, SF, Bucks: I decided to watch Yi’s Bucks play the Cavaliers on Monday, and two things stood out. I noticed that Fred McLeod, the Cavaliers’ play-by-play announcer, almost single-handedly took any enjoyment out of the game. There is nothing worse than listening to a homer trying to replicate the voice of Marv Albert and failing miserably. Perhaps only the Heat’s Eric Reid is as guilty in this department. More importantly, however, I also noticed that Yi has unlimited range and a fantastic looking stroke.

His biggest problem will be finding enough shots, similar to every rookie whose last name is not Durant. His teammates rarely look for Yi or consider running a play designed to get him the ball. It was a good sign, though, that he did not shy away from taking and missing the potential game-winning shot on Monday at the final buzzer. There’s a lot to like about his stats over the last five games – 14.2 PPG, 6.0 RPG, 58.0 FG% and 100 FT%.

Jared Dudley, PF, Bobcats: After being named a starter on December 3 and responding with 16 points, 10 rebounds and three steals, Dudley has received inconsistent minutes and, not surprisingly, his production has plummeted. Over the last five contests, Dudley registered only 15.0 MPG, 4.3 PPG and two permanent seats on the bench. The recent acquisition of centre Nazr Mohammed should further limit Dudley’s playing time and allow Emeka Okafor to permanently move back to his natural position of power forward.

Al Thornton, SF, Clippers: When the Clippers’ head coach goes on record as saying that the Clippers’ decision to waive Ruben Patterson was motivated by freeing up minutes for Thornton, I listen. The rookie’s best friend is consistent minutes. This situation bears watching, if only because he has seen a significant boost in minutes, averaging 24 MPG over the last two games.

Juan Carlos Navarro, PG, Grizzlies: He’s baaaaack. Since Pau Gasol was injured one week ago, Navarro has received a significant boost in minutes. In his two games since being re-inserted into the starting lineup, Navarro has averaged 32.5 MPG, 17.5 PPG and hit all 10 of his free throws. His biggest contribution will be three-pointers, having knocked down seven over the same period.

By Steve Simon
This entry was posted on Tuesday, December 18th, 2007 at 1:01 pm and is filed under BASKETBALL, Next Generation, Steve Simon. You can follow any responses to this entry through the RSS 2.0 feed. You can leave a response, or trackback from your own site.