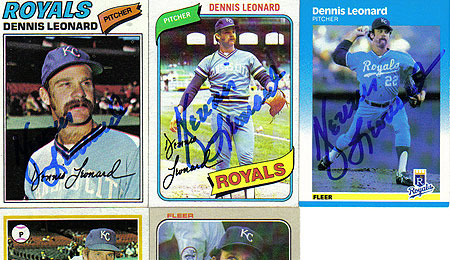 After pitching in the ACBL, Dennis Leonard went on to earn quite a collection of baseball cards with his likeness on them.

If you’re in a fantasy baseball league as deep as mine, you need to scour the college ranks to find the next big thing before the other owners in your league clue in.

That’s where summer collegiate leagues like the Atlantic Collegiate Baseball League come in.

The 41-year-old ACBL will have a new look next June, as its Stamford, Conn., franchise has relocated to Peeksville, N.Y.

The league is split into two divisions, each of which has four teams that play a 40-game regular season schedule in June and July, with playoffs running into early August.

Players are hand picked from the collegiate ranks to come and showcase their skills, making leagues like this a hotbed for MLB scouts.

By RotoRob
This entry was posted on Tuesday, December 18th, 2007 at 8:26 pm and is filed under BASEBALL, College sports, RotoRob. You can follow any responses to this entry through the RSS 2.0 feed. You can skip to the end and leave a response. Pinging is currently not allowed.