It’s All About the D, Baby 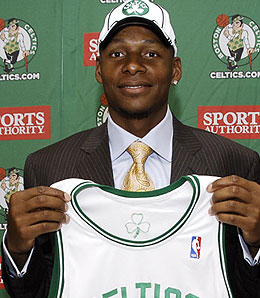 Even with Ray Allen missing the past couple of games, the beat goes on for the Celtics, winners of nine straight.

As a Celtic fan, even I have to admit shock at the quick turnaround this team has shown.

Sure, I knew the addition of Kevin Garnett and Ray Allen would help this team, but you still need a bench to win, right?

So after last season’s 24-win debacle, I would have been genuinely happy with a .500 campaign and perhaps squeaking into a playoff spot.

This Celtics’ squad is playing dominating D – they are number one in the NBA with just 86.5 points per game allowed (to put that in perspective, second-best Detroit is giving up 91.2). Sunday, they followed the game plan perfectly – don’t let the Raptors light it up from outside – en route to a 90-77 win in Toronto.

This latest victory takes Boston to 20-2 (8-2 on the road) and gives it a 7.5-game lead over Toronto in the Atlantic Division. The Cs are also four games up on Detroit for the Eastern Conference lead, setting up an intriguing matchup against the Pistons on Wednesday night.

But how about the fact that no other NBA team has less than five losses? Think about that for a moment.

Paul Pierce continues to lead the way offensively, scoring just 18 points (10 in the first quarter as Boston assumed immediate control of the game), but doing it fairly efficiently on just 15 shots, while also helping out with six boards. With KG and Ray Allen aboard, obviously Pierce isn’t getting near the amount of touches he has in recent years, but he’s playing a more well-rounded game as evidenced by his 5.0 APG – the second-best total of his career.

Best of all, gone is the scowl of the past couple of years, replaced by a bright smile. The Truth is having fun again. Wouldn’t you be having fun playing alongside Garnett, too?

Speaking of The Big Ticket, he pitched in 16 points yesterday, also a substandard offensive showing for him, but Garnett continues to do the little things right. Like how about dishing six dimes Sunday?

With Boston rolling, KG doesn’t have to play the kind of minutes he did with the T-Wolves, and his numbers are down across the board – especially in the block department, where, after a seven-swat performance against the Bulls a week and a half ago, he’s gone three straight games without registering a block. What’s up with that?

There’s no doubt that Boston’s defense-first approach and the fact that it has three go-to guys is cannibalizing all their totals, but, again, when you’re 20-2, who cares? Yes, I know the answer to that. It’s us fantasy owners who are getting killed here.

Guarding against the 3-pointer is just one of the areas Boston has completely turned it around this year. Last season, the Celtics were one of the weakest perimeter defensive teams in the year. This season, opponents are sinking just 30 per cent from the beyond the arc – that’s the best in the association.

At this pace, the men in green should cruise to their first Atlantic Division title since 2004-05, which is also the last time this team made it to the playoffs.

Of course, even though this turnaround has been driven by the D, Boston’s offense has also recovered nicely. Last year, this team had one of the worst offenses in the NBA; this season, Boston ranks 11th at 100.7 PPG – not dominating, no, but with its defense, that’s more than good enough. In fact, with a 14.2 differential between points scored and allowed, Boston is by far the best in the NBA (with Detroit a distant second at 8.5).

Boston’s aggressive D held a high-powered Toronto team to a season-low in points yesterday (the Raps’ previous low was 84 on December 7 against…yup, the Celtics). You can expect that to happen to plenty of teams when they run into the Celtics these days. In fact, Boston is now 3-0 against the defending Atlantic Division Champions this season.

By the way, if you’re one for believing that history repeats, consider that the only other Celtic team to start 20-2 – the 1963-64 incarnation – went on to win the NBA title.

As if it needed it, Boston is about to get a big boost as Ray Allen, out the past two games with a sore right ankle, is expected to return Wednesday.

The Celtics had Scot Pollard (back) ready to play yesterday, but he took a DNP-CD.

Rajon Rondo pitched in with 14 points Sunday, and he’s been getting hot offensively, with 15.5 PPG in last two outings as he helps fill the gap left by Ray Allen. The knock on him was his ability to knock down shots, right? Well, have you noticed that his dude is sinking 53 per cent of his attempts from the field this season?

Eddie House came through with a nice contribution off the bench, sinking 3-of-4 treys on the way to 11 points with two assists, a steal and a block. He’s seeing some significant minutes off the Beantown bench, and has responded with 8.5 PPG, giving him some value in very deep fantasy leagues.

Tony Allen, starting the past couple of games for Ray Allen, has filled in admirably. He reached double digits in scoring both games, totaling eight rebounds, six steals, four assists and three 3-pointers in the two games. The extra PT is helping him find his shooting touch after missing most of last year with torn knee ligaments.

James Posey bounced back from an offgame with a big show off the Boston bench Sunday, scoring 10 points with seven rebounds, a steal and an assist. He’s doing a great job defensively in the last two games with 12 rebounds and three steals. Posey also nailed two 3-pointers yesterday. Although he doesn’t get as many attempts from beyond the arc in this offense, he’s been deadly on the shots he is getting (45.6 per cent from downtown).

Starting with Wednesday in Detroit, Boston will definitely be tested more seriously. Sunday, the Celtics face Orlando, which handed them one of their losses earlier this year. To end the calendar year, Boston has a western road trip – always a challenge. And it comes home vs. Houston to start 2008.

By RotoRob
This entry was posted on Monday, December 17th, 2007 at 3:09 pm and is filed under BASKETBALL, RotoRob, Team report. You can follow any responses to this entry through the RSS 2.0 feed. You can skip to the end and leave a response. Pinging is currently not allowed.