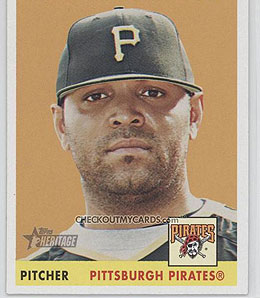 Perhaps free agent Shawn Chacon will get a sweet enough deal to be able to afford to shave the next time he has his baseball card photo taken.

Okay, time to wrap up our look at the key remaining free agents. We’ve already explored the AL in Part One and Two, and did most of the NL in Part Three and Four.

Today, we will complete the RotoRob 2007 Free Agent Report, which has turned into quite the tome, by wrapping up the final few teams in the National League.

Shawn Chacon: Colorado is thinking about bringing back its one-time starter turned closer, but the Rox are smart enough to want him as a reliever – not a starter. Chacon’s numbers were much better out of the pen last year, so this is a wise move. The Rockies are apparently not willing to go longer than a year, and Pittsburgh almost certainly doesn’t want him back, so Chacon’s ultimate destination is still very much up in the air. Chacon’s hit rates – especially out of the pen – suggest he can finally find his groove as a set-up man after bouncing around in every conceivable role over his career.

Gary Bennett: The veteran back-up catcher, who has admitted to taking HGH in 2003 – a revelation that could affect his signing status – was said to be a candidate for the Dodgers’ second catcher job. Bennett’s PT has been on the decline for four straight seasons, so if he’s itching to make that five, LA is a great place for him, as anyone behind Russell Martin is sure to see plenty of pine time. Just ask Mike Lieberthal.

Russell Branyan: Considering Eric Chavez’s perennial fragile state, Oakland could use someone like Branyan as an insurance policy. Despite his incredibly underwhelming career, Branyan never ceases to be of some interest because of his power potential, which he again flashed last season.

Mike Cameron: We know he won’t be back in San Diego now that the Padres have acquired Jim Edmonds, but the Phillies, Cards, Texas and White Sox remain options. Philadelphia, which lost Aaron Rowand to free agency, is a very good bet, and Cameron’s power numbers could improve nicely at CBP. Cameron, who will miss the first 25 games of the year with a drug suspension, just can’t seem to improve his contact rates as he continues to whiff way too often to maintain a decent BA. He remains an excellent base stealer, however, and if he runs more often this year, he’ll have value because of his constant threat to put up 25 HR/25 SB or better.

Brett Tomko: Cincy is considering bringing back Tomko to the place where it all began for him and where he had his best success as a big leaguer. (Sadly, Tomko’s rookie season remains his finest campaign by far.) At this point, Tomko is a swingman who is ineffective in either role, although he’s less pathetic as a starter. If given a full-time spot in the rotation, Tomko will fan plenty of batters, but his ERA will be tough to swallow, so definitely steer clear in 4×4 leagues.

Barry Bonds: Obviously, there’s a huge question of whether Bonds is simply done after the Mitchell Report and the perjury/obstruction of justice charges. Yet Oakland seems to be the obvious choice for Bonds to land if he’s somehow able to play next year. If he does play, Bonds needs to move to an AL team where he can DH exclusively. Having to remove him from games for defensive purposes has really shackled the Giants’ offense in recent years and, combined with his continued massive walk totals, has really limited the amount of damage Bonds can do, which in turns has stunted his fantasy value.

Pedro Feliz: The Giants are working to re-sign Feliz, and he wants a three-year deal. San Francisco, however, only wants to give him two years at the most, so this may take some time to sort out. Feliz’s power slipped last year, but at least he improved his contact rates. He seems to have been sliding for a couple of seasons now, so it looks like his peak has past.

Ryan Klesko: Boston is a possible suitor, as the Sox need a back-up first baseman, and the fact that Klesko can also man the corner outfield spots helps. Klesko still swings a decent bat, and he’ll even swipe the occasional base.

Russ Ortiz: He’s going to miss the entire season after undergoing Tommy John surgery, and although his control was better last year, Ortiz has about as much use as an SPF 2 sunscreen in an Ozone-deteriorating world.

Robert Fick: The Nats are iffy about bringing him back, especially since they landed Paul Lo Duca. Of course, Fick didn’t even appear at catcher last year. That, plus the fact that his once-modest power has shrunk, has brought him to the point where he has no intrigue anymore.

By RotoRob
This entry was posted on Sunday, December 16th, 2007 at 10:17 pm and is filed under BASEBALL, RotoRob, Rumours. You can follow any responses to this entry through the RSS 2.0 feed. You can leave a response, or trackback from your own site.