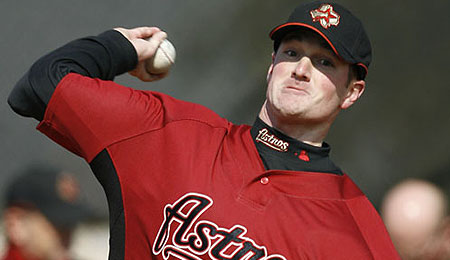 After an injury-plagued and horrible season, Jason Jennings can’t be choosy about where he’ll pitch in 2008. (Billy Smith/Chronicle)

We’ve already completed our look at the key remaining free agents in the American League in Parts One and Two, plus started the NL in Part Three. Today, let’s see if we can’t wrap up the National League.

Byung-Hyun Kim: The Marlins may seek to bring back this veteran starter, but I’m not sure why. Kim could get away with being as hittable as he is and walking as many as he does back when he was truly a groundball specialist. But those days are virtually over, and that means lots of long balls, as in a career-worst 20 allowed last year. Stranger yet, he somehow won double digits for the first time in his career.

Jason Jennings: Texas is also seeking rotation help, but the latest word is that the Rangers will try to find their starting five internally. Of course, after completely bombing in Houston – he spent half the year on the DL and the other half sucking worse than ever – Jennings will probably be happy to get away from the great state of Texas. Then again, starters with a 6.46 ERA can’t exactly be choosy.

Trever Miller: The Phillies could use a lefty specialist now that J.C. Romero is being shifting into a set-up role. Miller was unable to duplicate his stellar 2006, but he remained difficult to hit, especially by lefties (.209 BAA). Tampa Bay may also be in the market for a LOOGY.

Brian Moehler: The Marlins may be interested in bringing back Moehler, who had a modicum of success with the team as a swingman in 2005 and 2006. He’s exactly the kind of cheap veteran that Florida is attracted to. Chances are, Moehler would have much more success as a reliever, so as long as Florida isn’t planning on giving him anything close to the 46 starts he made over the two years he was there, that’s fine. As a long reliever/spot starter limited to no more than, say, seven to 10 starts, Moehler might be useful – and no, I don’t mean for fantasy purposes.

Luis Gonzalez: The Padres make take a peek at Gonzalez, assuming they can’t land Geoff Jenkins, that is. Now that his power has gone AWOL (in fact, many expressed surprise that Gonzo didn’t get a mention in the Mitchell Report), he is not much more than a replacement level outfielder.

Mike Lieberthal: The Dodgers may bring him back, but surely Lieberthal is seeking a situation where he’ll play more often than he did last year. Let’s face it, playing behind Russell Martin doesn’t tend to leave you with a ton of starts. Lieberthal’s power – once his calling card – is completely gone. He didn’t go yard once last season for the first time in a dozen years.

Rudy Seanez: The Dodgers have reportedly offered him a one-year deal to re-sign. The 39-year-old righty is coming off a season in which he posted career highs in both games and innings pitched. Unfortunately, he was also pretty susceptible to the long ball.

Mark Sweeney: After a couple of years with NL West rivals, Sweeney has said he’d be interested in heading back to the Padres for a third stint in San Diego. The Padres might be amenable, but they have other holes to fill first. Sweeney didn’t play much last year, but he stills swings a decent bat off the bench. The Dodgers may want to retain him as well.

David Wells: Cincinnati is said to be looking at the portly old lefty, while Arizona has no interest, especially after landing Dan Haren in a deal. Seattle is another team considering Boomer, coming off the worst season of his career. Wells’ command has really slipped, and at age 44, he really needs to be set adrift on an ice floe.

Tony Graffanino: Milwaukee isn’t expected to bring this vet back after he’s undergone two surgeries on his right knee. It doesn’t appear that Graffanino has much offense left to contribute and he’s never had power and what little speed he once had is gone.

Geoff Jenkins: Jenkins seems to be getting nibbles all over the place. The Padres definitely could use outfield help. Jenkins still has pop, but did not play as big a role on the Brewers as he has in recent years, as the team used him almost exclusively against righties.

Corey Koskie: Boston is going to need a back-up corner infielder, and Koskie, being a lefty, could definitely interest the Sox. Koskie rediscovered his power in 2006, cracking 35 extra-base hits in just 289 plate appearances, so assuming he’s over the concussion issues which sidelined him all of last year, he could be a nice boost to the Boston bench.

Damian Miller: If Lieberthal decides to bolt from the Dodgers, Miller is a candidate to take his job as Martin’s backup. Miller is coming off his worst season, and at age 38, looks about ready to pack it in.

Mike DiFelice: If the Dodgers don’t re-sign Lieberthal or pen Miller or Gary Bennett, Di Felice is another veteran back-up catcher they could look at. DeFelice actually got more at-bats last year than any season since 2003. That doesn’t mean he’s suddenly an option, but he could be moderately productive playing once a week.

Shawn Green: Philly is looking for outfield help, but it’s doubtful they’ll make a play for Green. He’s still a capable player on the strong sign of a platoon, but the home runs are starting to turn into doubles for the now 35-year-old.

Antonio Alfonseca: The Pirates want to upgrade their pen, but six fingers might be a bit old and a bit too pricey for their tastes. Scary thought of the day: Alfonseca was actually marginally better last year than he was in 2006, yet his BAA was .314. How does he keep getting jobs?

Rod Barajas: The BoSox considered him, but are going to look elsewhere for a back-up catcher. It’s kind of shocking how quickly Barajas morphed from a power-hitting, legitimately useful fantasy catcher to a third-stringer who is completely unproductive.

Freddy Garcia: Texas needs pitching, but is unlikely to take a chance on Garcia, who is coming off shoulder surgery. The Padres could use another starter, but considering Garcia probably won’t be ready until the second half, he’s not a good option for a contender.

Jon Lieber: Seattle definitely needs some pitching help, so this is a possibility. He’s getting on in years, but a team like Cincy might make a play for Lieber, who is coming off foot surgery that cost him most of the season last year. He is still capable of being a somewhat effective hurler, and I definitely like his chances away from Citizen’s Bank Park a lot more.

Kyle Lohse: In a thin pitching market, Lohse is looking to cash in with a four- or five-year deal worth more than $10 million per season. And despite his weak strikeout rate, someone is going to cough up that kind of cash on a pitcher as middling as Lohse.

Jose Mesa: Might the Pirates try to bring him back? They do need the help, but Mesa is old and expensive. Oh, and then there’s the fact that he doesn’t log enough innings anymore and the ones that he does get through are rated AA14. It’s about time to euthanize this old timer.

Abraham Nunez: Nunez, a Mitchell Report subject, is someone Florida may target as a replacement for Miguel Cabrera. We know Nunez has the glove, but his career high in slugging is .361. Uh, ya. Isn’t third base supposed to be a power position?

Okay, so I lied. I’m not going to finish the NL today. There’s just too many freaking dudes still unsigned. In Part Five, we will wrap up the outstanding free agents for the final five NL clubs.

By RotoRob
This entry was posted on Saturday, December 15th, 2007 at 8:59 pm and is filed under BASEBALL, RotoRob, Rumours. You can follow any responses to this entry through the RSS 2.0 feed. You can skip to the end and leave a response. Pinging is currently not allowed.