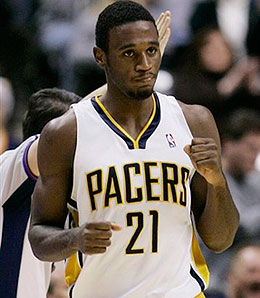 Has Kareem Rush, one of our pre-season sleepers, finally emerged? He nailed three treys and scored 22 points last night, his most significant contribution since landing in Indy. In today’s Daily Dose, we look at the Rush to grab Kareem.

A chipped tooth can’t stop Steve Nash’s double-double show; Tony Parker may get some down time to rest his wonky ankles; Shawn Marion appears to be heating up; and Tim Duncan missed another one Tuesday, but is expected to try to talk his way back into action for tonight.

We’ve got all of this plus a boatload more fantasy basketball related news tidbits in the Dose.

By RotoRob
Tags: Indiana Pacers, Kareem Rush, NBA, Shawn Marion, Steve Nash, Tim Duncan, Tony Parker
This entry was posted on Thursday, December 13th, 2007 at 7:57 pm and is filed under BASKETBALL, NBA Daily Dose, RotoRob. You can follow any responses to this entry through the RSS 2.0 feed. Both comments and pings are currently closed.