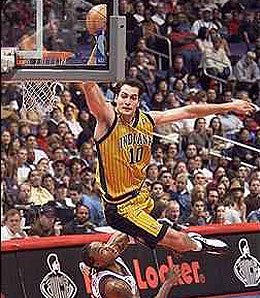 With Jeff Foster out, you need to look elsewhere for help.

T.J. Ford went down with a pretty scary injury that turned out to be nothing, Kevin Martin is out four-to-six weeks with a strained groin, Jeff Foster’s back is ailing, and Tim Duncan is missing time with a gimpy knee. Had enough injuries yet? Hey, I’m scrambling just like you to find replacements for my injured guys, but the key to your success could be whether or not you read The Wire Troll!

John Salmons: He will lose some time with Francisco Garcia around, but he is the main starter while K-Mart is out. Salmons has the ability to fill in adequately, just don’t hope for the same points that you got with Martin. Still, he’s been in double digits in points in six straight games and he’s even enjoyed back-to-back two-block games, the later of which is not an area he tends to contribute in.

Udonis Haslem: He is available in a lot of leagues still, but he has been putting up 15.8 PPG to go along with his 8.8 RPG over the past week. He won’t get you many blocks or steals, but he also doesn’t turn the ball over much either. Haslem has a solid shooting percentage, a solid free-throw percentage, and is just a solid overall player when talking about power forwards. On Monday, he went off for a season-best 21 points while pulling down a dozen boards. He’s playing more than ever before, and is responding with better numbers.

Matt Barnes: Barnes seems to come and go when looking at the starting lineup, which is typical of a Don Nelson-coached team. But, when he plays he is very capable of putting up good numbers in a wide open Warriors’ offense. Over the past week, he has been averaging 11.0 PPG, 7.0 RPG, 1.8 SPG, and only 0.8 turnovers per game. I’d pick him up and play him while he is on his game. But, keep an eye for when his minutes start to slip. Barnes took a hard fall Tuesday, but it obviously didn’t hurt his game last night. Damn, he’s even been dishing some dimes of late, with seven in the past two games.

By James Morris
This entry was posted on Thursday, December 13th, 2007 at 7:17 pm and is filed under BASKETBALL, James Morris, The Wire Troll. You can follow any responses to this entry through the RSS 2.0 feed. You can leave a response, or trackback from your own site.