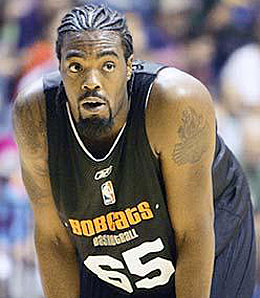 The Hornets’ injury list is growing again with Melvin Ely the lastest victim.

Last season, if you recall, the New Orleans Hornets got out of the gate like gangbusters, starting the year on an 8-3 tear and looking like one of the NBA’s most improved teams.

However, a steady stream of injuries to key personnel quickly ravaged their chances ultimately leading to a 31-41 record over the remaining schedule and a third straight season out of the playoffs (a streak that began, not coincidencally, the year New Orleans was shifted to the Western Conference).

Well, New Orleans got off to another blazing start this season, winning eight of their first 10 games, but the injuries once again have struck and the team is spinning its wheels, going just 6-6 since that fantastic start.

Yesterday, the news got worse when Melvin Ely was diagnosed with a fractured left eye socket, courtesy of an errant Kenyon Martin elbow on Wednesday night. Ely is headed back to New Orleans for more tests and is out tonight. We have no idea when he’ll be ready to return. K-Mart, by the way, could face disciplinary action if the Hornets decide to send the tape to the NBA.

Ely has been a fairly important big man off the Hornet bench, but separately, this is a blow the team can deal with. However, when combined with the already bulging list of walking wounded – Julian Wright, Ryan Bowen, Adam Haluska, Peja Stojakovic and Morris Peterson – the loss of Ely may force the Hornets to make a move and add someone to the roster.

Wright hurt his left shoulder Wednesday and was forced to ride a stationary bike during Thursday’s practice, lousy timing for the rookie as he’s been getting more PT recently.

Bowen (knee) will be out another couple of weeks while Haluska (ankle) can’t practice right now.

On the plus side, both Stojakovic (groin) and Peterson (back) were able to practice fully yesterday. Peterson says he is hoping to play tonight while Stojakovic said his groin felt tender on Wednesday, but he planned to play tonight.

If neither Peja nor MoPete can play, the Hornets will be down to nine players tonight – and that includes a wonky Wright. Considering they face a nasty one-two this weekend in Dallas tonight and then at home against Phoenix tomorrow, the Hornets could use all hands on deck.

By RotoRob
This entry was posted on Friday, December 14th, 2007 at 1:34 pm and is filed under BASKETBALL, RotoRob, Team report. You can follow any responses to this entry through the RSS 2.0 feed. You can leave a response, or trackback from your own site.