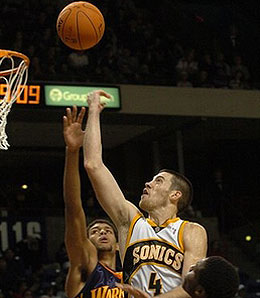 Nick Collison’s busted nose will keep him out for a couple games.

Oh man, the Magic just keep rolling, especially on the road. Who cares that Rashard Lewis bombed in his return to Em City? Dwight Howard continued to step up his massively improved offensive game, getting to the line 20 times and winding up with a career-high 39 points Wednesday. We’ve got the lowdown on Howard and the Magic’s exploits in today’s Daily Dose.

So much for CB4 getting untracked; Mr. Eva Longoria is rocking (wouldn’t you be too, if you were porking her?); Nick Collison will miss the next couple of games for the putrid Sonics; J.J. Redick finally did something; Should we keep an eye on Carlos Arroyo and Jameer Nelson’s PT?; and the Jazz are dealing with some health issues with two of their studs.

We’ve all these stories, plus a boatload more fantasy basketball blurbs in Da Dose.

By RotoRob
This entry was posted on Thursday, November 29th, 2007 at 8:48 pm and is filed under BASKETBALL, NBA Daily Dose, RotoRob. You can follow any responses to this entry through the RSS 2.0 feed. You can skip to the end and leave a response. Pinging is currently not allowed.