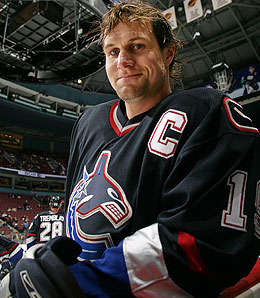 Don’t look now, but Markus Naslund is almost back to being a point-per-game dude.

You remember that guy who used to play for the Vancouver Canucks, had a wicked wrist shot, and would put up around 90 points a season? Yeah, that Markus Naslund guy. I’ve heard a rumour that he’s back. Okay, 22 points in 25 games isn’t exactly Wayne Gretzky-esque, but considering where Naslund’s been, it’s a start — plus he’s playing with those freaky Sedin twins (random fact: Henrik Sedin fantasizes about Meg Ryan. Yeah. He’s got issues.)

Staying in Vancouver, remember when Philadelphia gave Ryan Kesler an idiotic offer sheet? Well, Mr. Kesler’s coming into his own right now, putting up the same number of points as one Brendan Morrison, except he’s younger, got more upside, and a +7 as opposed to Morrison’s -2. Need some moving boxes, Brendan?

Blow up the Ottawa Senators, they’re bums. After losing six of seven — granted, some in OT — the Sens in November are hitting a major cold streak and Ottawa fans are freaking out. A major point of contention? Giving up more three goals or more in most of those games. Martin Gerber’s played the bulk of those games, so look for the Sens to give Ray Emery a little more of a chance as they try to snap out of their funk. If not, then look for Emery to snap and beat the crap out of some random person — he’s a little on the nutty side, you know?

The Jonathan “I won the Rocket Richard Trophy once” Cheechoo Watch: one goal in his last 16 games.

Martin Havlat’s back for the Chicago Blackhawks, and that means that for the first time in about a decade, the Hawks have two dangerous forward lines anchored by the Havlat/Robert Lang combo and the dynamic duo of Jonathan Toews and Patrick Kane. Patrick Sharp’s been placed on the Toews/Kane line, so look for him to ride out some easy points for the time being.

In the “Which one of these is not like the others?” category, did you know that Cory Stillman is in the top 10 in scoring? His buddy Rod Brind’Amour isn’t that far behind, but what about Eric Staal? Well, at this point, you’d have been better putting that fantasy pick on fellow Hurricanes Matt Cullen, Ray Whitney, or Justin Williams. If you’re looking to get short-term gain out of some players, Cullen’s the most likely to drop off sooner rather than later.

Did you know that Marian Gaborik put out an apology to fantasy owners for his injuries and performance? That makes him one cool dude in my book, whatever his numbers are.

Big surprise: of all the players with 70 shots or more, Ilya Kovalchuk has the best shooting percentage. Second best? Philly’s Mike Richards — however, he’s only got 70 shots in 24 games (14 goals), meaning he’s just getting over two shots a game. Hey Richards, how about making some fantasy owners happy and shoot the damn puck more?

The best combo of saves and wins for a goaltender right now? Not Roberto Luongo, not Miikka “I used to be good” Kiprusoff, but Tomas Vokoun, who shows that being traded to Florida is not exile. The Panthers have regained their footing, and Vokoun’s 705 shots against and 644 saves are leading the league. Of course, that doesn’t say much about the Panthers’ defense, but if you’re getting a point for every save, who cares? (Except for people who own Jay Bouwmeester.)

Jason LaBarbera’s save percentages over the last six games: .944, .906, .963, .882, .885, .974. Hey, I know the Kings’ defense isn’t exactly the second coming of Scott Niedermayer/Chris Pronger, but help LaBarbera get a little more consistent, will you? Speaking of Kings’ defense, my question of the week is whether or not Jack Johnson’s nickname should be Big Johnson. Does the fact that this early ’90s reference is dated make it lame or does it make it funny since there’s probably no way Jack Johnson actually knows what it is?

By Mike Chen
Tags: Henrik Sedin
This entry was posted on Friday, November 30th, 2007 at 7:27 pm and is filed under HOCKEY, Ice Chips, Mike Chen. You can follow any responses to this entry through the RSS 2.0 feed. Both comments and pings are currently closed.