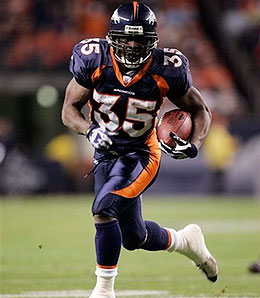 If Selvin Young starts this week, he could run wild against the woeful Raiders’ run defense. (AP Photo/Jack Dempsey)

1. Brian Westbrook vs. Seahawks – Hey, even John Madden is calling Westbrook the best running back in the league right now. The next guy on the rankings might have something to say about that, but the truth of the matter is that he’s the safest start, week in and week out.

2. Adrian Peterson vs. Lions – Yes! Purple Jesus is back! Yeah, yeah, yeah, Chester Taylor played well in Peterson’s absence, but it wasn’t the same. Taylor didn’t have the style, the flare, or the magic! If you own Peterson, you pretty much have to start him right away.

3. LaDainian Tomlinson @ Chiefs – After playing Chicago (when the Bears were healthy), New England, Minnesota, Indianapolis, Jacksonville, and Baltimore, Tomlinson has to be thrilled to get a team that isn’t elite defensively. And it’s not like the Chiefs are terrible, but they aren’t the best of the best. So, Tomlinson should have a 100-yard game and at least one score.

4. Denver RB @ Raiders – If Selvin Young gets the nod, he’s a great start against the worst run defense in the league. If Andre Hall starts, he’s a great start. If Travis Henry is back, he’s a decent start. Unfortunately, the Broncos aren’t known for letting anyone know which running back will take the field for them. This is every fantasy owner’s greatest fear.

5. Steven Jackson vs. Falcons – Okay, I guess Jackson was alright after all. He chipped in with another 90-yard effort, and also crossed the goal line this time. And now he gets the Falcons, who allow over 120 rushing yards per game. It’s looking good for Jackson.

6. Frank Gore @ Panthers – For 90 per cent of Gore owners, last week was a case of too little, too late. Now we have to deal with the impossible-to-know, Was that real or was that a fluke? thing this week. I think Gore mainly struggled due to poor offensive line play, so the game last week was a good sign that the line played better. Of course, the Panthers are a bit better than the Cardinals, but that doesn’t mean Gore can’t get another 100-yard game.

7. Willie Parker vs. Bengals – It looks as though the Steelers’ game could be kind of rainy. Normally, that wouldn’t be a huge deal, but in Steelers-ville, for some reason, that could be the difference between a 35-31 game and a 7-3 game. Monitor the weather before you commit to Parker.

8. Justin Fargas vs. Broncos – Denver’s run defense has improved this season. It was ranked last, and now it is 29th. That’s progress! Okay, Fargas is hot off of a 150-total yard effort, so he’s got to be a safe start in this one.

9. Joseph Addai vs. Jaguars – Ever since Marvin Harrison went out with an injury, Addai has been more of a focus for opponents. It has led to a not-so-pretty 3.2 yards per carry average over the last three games. And that was against the 21st-, 18th-, and 26th-ranked run defenses in the league. Actually, screw this. Addai should be ranked 15th or so. Unfortunately, the rankings are locked in. Oh well.

10. Earnest Graham @ Saints – Graham has been one of the most consistent fantasy performers since he took over for the injured Carnell Williams. I don’t know who he is. I don’t know where he’s from. I don’t know what school he went to. But I guess that doesn’t matter anymore. Why can’t this happen more often?

11. Kolby Smith vs. Chiefs – Oh wait! It does happen often! Much as a certain someone (me!) predicted last week, Smith ran behind a very solid Chiefs’ line and ran very well. Larry Johnson might as well have not played this season, but the Kansas City running game is still viable. Smith will continue to be worth starting and I will continue to gloat about it. But thank the heavens I’m so modest.

13. Willis McGahee vs. Patriots – This isn’t the best matchup in the world, especially when you consider that Kyle Boller is no A.J. Feeley. Umm, that was one of the saddest sentences I’ve ever written. In fact, I’m too distraught to talk about McGahee anymore.

14. Rudi Johnson @ Steelers – He’s back! Rudi and his 90-yard, one-touchdown days are legendary!

15. Fred Taylor @ Colts – Taylor will not die. He is Superman. Even with Maurice Jones-Drew taking a more prominent role, Taylor is the one getting the 50-yard scores. Whatever.

16. Edgerrin James vs. Browns – Eighty yards and a potential score — pretty much the standard for James.

17. Maurice Jones-Drew @ Colts – After Jones-Drew has struggled the last couple of weeks, I think it’s becoming increasingly tough to go out of your way to start him. In fact, Taylor has been a much more consistent player recently. Yes, there’s always a chance that Jones-Drew has a huge game, but only start him if you consider yourself an underdog that can afford to throw caution into the wind.

18. Warrick Dunn @ Rams – Dunn has contributed at least 70 total yards for four straight weeks now. He also has two scores over that span. It’s not going to set the world on fire, but it is enough to make Dunn a fantasy contributor again. Of course, Jerious Norwood is averaging 5.7 yards per carry compared to Dunn’s 3.4. You’d think with the Falcons completely out of it that the coaching staff would be more than willing to give the up and coming youngster a bigger share of the carries.

19. Shaun Alexander @ Eagles – Apparently Alexander is going to be back this week, so adjust your lineups accordingly. And by

By Andy Goldstein
Tags: Running Back Rankings
This entry was posted on Thursday, November 29th, 2007 at 4:35 pm and is filed under Andy Goldstein, Cheat sheets, FOOTBALL. You can follow any responses to this entry through the RSS 2.0 feed. Both comments and pings are currently closed.