NBA Daily Dose: Do You Believe in Magic? 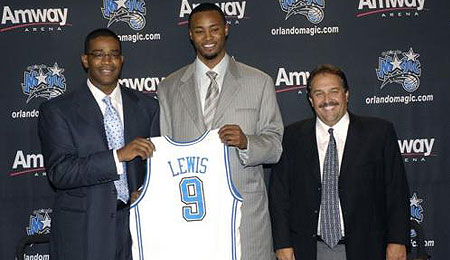 With the NBA underway, we’re back with another year of Daily Doses for your reading pleasure. We’ll be doing the Dose every Thursday morning, with perhaps the occasional extra day thrown in for good measure.

Any fear that Rashard Lewis wouldn’t be able to cut it as the main scoring option on his team should be laid to rest after he went off for 26 points last night in his Magic debut. We talk about how Lewis shook off his pre-season injury woes to star on Opening Night in today’s Daily Dose.

What the hell happened to LeBron James last night? David West not only unexpectedly played, he excelled; Manu Ginobili is going bananas in the early going; Jermaine O’Neal has been cleared to play Friday; and Stromile Swift won’t have any fantasy value after all, apparently.

We’ve got all of this plus a bucket full more of fantasy basketball blurbs in today’s Dose.

By RotoRob
This entry was posted on Thursday, November 1st, 2007 at 1:01 pm and is filed under BASKETBALL, NBA Daily Dose, RotoRob. You can follow any responses to this entry through the RSS 2.0 feed. You can leave a response, or trackback from your own site.