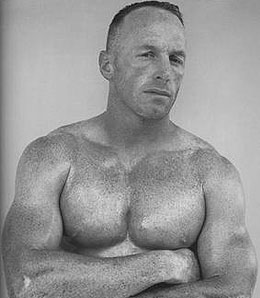 Hey, every now and then we’ve got to throw the ladies a bone. How about a shirtless Jeff Garcia? Does that get you all hot and bothered, oh women readers of RotoRob.com? What’s that? You’d prefer to see Andy without his shirt?

1. Tom Brady @ Colts – You no longer have to tell anyone you actually won your fantasy game. You just need to say that you started Brady.

2. Carson Palmer @ Bills – It may seem like a minor detail, but with Chris Henry back in the action, Palmer will benefit. This couldn’t have come at a better time, since the Bengals are completely falling apart. Hmm, if Henry is the solidifying force behind the Bengals, what’s next? Ron Artest being named a team captain? Oh, wait…

3. Peyton Manning vs. Patriots – I find it interesting that there’s about a half a per cent of the country that isn’t getting the Colts/Pats game. So enjoy your freedom, Houston and Oakland fans!

4. Matt Hasselbeck @ Browns – This game stands to be relatively high scoring, which is good news for both of the quarterbacks. Hasselbeck, against all odds, has put together a quality season while throwing to, well, I really am not sure who the number one is. But that’s the point. Hasselbeck might be having the best year of his career.

5. Derek Anderson vs. Seahawks – Anderson is also having a career year. And I’m not sure the Browns’ organization is completely thrilled about this. Don’t get me wrong, I’m sure they are happy that they are 4-3 and have a chance at the playoffs. But the impending Anderson/Brady Quinn decisions and battles will cause many headaches. I say trade Quinn now while he still has value. But that’s just me.

6. Tony Romo @ Eagles – While the Eagles have been a boring and somewhat terrible team this year, the defense has played suprisingly well. Romo and Terrell Owens will probably hook up for a score, and Jason Witten might get another one, but the yardage won’t be easy to come by.

9. Kurt Warner @ Bucs – Tampa is a tough match up for Warner. Not because its secondary is so good. It’s pretty good, but Anquan Boldin and Larry Fitzgerald can beat anyone. But the Bucs are loaded with hard hitters, and Warner is one big hit from missing the game or missing the rest of the season. Or whatever. Just swim at your own risk.

10. Jon Kitna vs. Broncos – Is anyone worried about the fact that Kitna hasn’t scored a touchdown since Week Four? Umm, Mr. Martz? Are you working on this? Please?

11. Donovan McNabb vs. Cowboys – Who knows what to think about McNabb? After three out of four sub par weeks, McNabb has had three straight start-worthy performances. Screw it. McNabb should be ahead of Kitna despite the matchups. I just can’t bring myself to actually do it.

12. Jeff Garcia vs. Cardinals – If Garcia got 300 yards and two scores, it wouldn’t surprise me in the least. But it’s Jeff Garcia. He was relevant when Jennifer Lopez was still hot (and we’re not just talking about her booty). Yeah, I said it.

13. J.P. Losman vs. Bengals – Derek, for some reason, has a personal vendetta against Losman. It makes absolutely no sense to me either.

14. Jay Cutler @ Lions – As I’ve said in the past, it’s all about Tony Scheffler for Cutler. Over the last two weeks, where Scheffler has finally been involved in the offense, Cutler has four touchdowns and only two interceptions. It’s that simple.

By Andy Goldstein
This entry was posted on Friday, November 2nd, 2007 at 2:56 pm and is filed under Andy Goldstein, Cheat sheets, FOOTBALL. You can follow any responses to this entry through the RSS 2.0 feed. You can skip to the end and leave a response. Pinging is currently not allowed.