Kudos to the BoSox 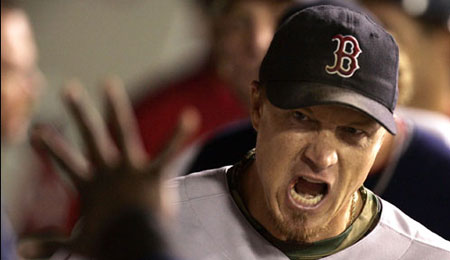 Mike Timlin enjoyed a very strong postseason, but he may have pitched his last game for the World Champion Red Sox.

I suppose it would be remiss of me not to acknowledge the second World Series Championship by my beloved Red Sox in the past four years, captured on Sunday evening.

True, as anticlimactic as it seemed when the Sox finally won it all in 2004 after an excruciating 86-year wait, this season’s championship seemed even easier to attain, despite the fact things looked grim in the ALCS after four games.

But we can’t overlook that with a pair of titles within a four-year stretch, Boston has built a machine capable of approaching dynastic-type proportions.

Yes, there are a few core members of the team who are getting long in the tooth (Curt Schilling, 40, but likely done with the Red Sox; Mike Timlin, 41, and perhaps done altogether; Jason Varitek, 35, but still the heart and soul of this club; and Manny Ramirez, 35, yet still a potent offensive force as evidenced by his Herculean-like playoff showing), but the club has plenty of youth who should help keep the Sox a force to be reckoned with for years to come.

The Sox have a bevy of middle aged stars young enough to continue to drive this team, including World Series MVP Mike Lowell (33, and arguably the team’s most important player this season); Hideki Okajima (31, and an incredible find this season, especially with his brilliance in Game 2 of the World Series); Julio Lugo (31, likely destined for a far better second season as a Sox, but still an important contributor with the glove and on the basepaths, where he’s helped usher in a new look for this traditionally slugging team); J.D. Drew (31, and huge come playoff time despite his underwhelming debut with the Sox); and David Ortiz (31, and as dominant an offensive force as there is in the game).

But let’s consider the youngsters who have already made key contributions to this team, with the best yet to come:

When Varitek tucked the final out ball into his back pocket early Monday morning, it laid to rest any fears that we could have a 2004-like situation when Doug Mientkiewicz bolted town with the last-out ball before finally surrendering it to the Hall of Fame. Captain Varitek, among the most selfless players in the game and the ultimate team player? Well, don’t worry, that ball is safe and sound.

And there may be more to come.

By RotoRob
Tags: Boston Red Sox
This entry was posted on Tuesday, October 30th, 2007 at 12:24 pm and is filed under BASEBALL, RotoRob, Team report. You can follow any responses to this entry through the RSS 2.0 feed. Both comments and pings are currently closed.