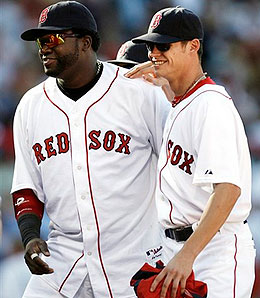 So you don’t think late-season call-ups can made a difference to your fantasy team? Imagine if you had started Clay Buchholz, right, on Saturday. (AP Photo/Winslow Townson)

With the September 1 deadline having now passed, and roster expansion to the 40-man roster occurring, I felt it was prudent to take a quick look at some of the first wave of call-ups and their potential fantasy impact.

With most of the Triple-A teams wrapping up their regular seasons at the beginning of next week, this list is but a preliminary one as more promotions will be announced in the next several days and weeks.

Do they, and can they make a difference to your fantasy squads? You betcha!

It is now September 2, and to those that gambled early on Saturday’s starting pitchers, the rewards have been huge. In two of my leagues, league owners who weren’t glued to either their televisions or computer monitors last night, woke up this morning to the news that their starting pitcher for the Red Sox, Clay Buchholz, had in fact pitched a no-no in his second career start. Does that somehow transcend into some nice fantasy numbers? Without a doubt. Something tells me that Buchholz is going to be one hot pickup in the next several days.

Mike Pelfry of the Mets pitched a one-hitter through six innings with seven Ks in his first game back in the bigs. Ian Kennedy replaced the ineffective Mike Mussina and pitched seven strong innings of five-hit ball with six Ks and only one earned run — a very nice effort and this probably guarantees at least a couple more starts down the stretch.

Now don’t, of course, take this as a ringing endorsement of these guys; they’re all young and are going to be prone to the growing pains associated with their recent promotions to the bigs, but without a doubt all three are solid prospects and, at this time of the year, the game we play can be decided by the narrowest of margins.

To those who risk and gamble go the rewards. Over my 17 years playing this wonderful game, I have seen league titles been won by as little as one RBI, one SB, two Ks, and in one year, the BA title went down to a difference of .0003. Last year, in my 20-team league, in which I managed to squeak out a victory by the slimmest of margins, the team in second trying to track me down started nine starting pitchers on the last day and came up two wins short of beating me.

Differing depths and strategies to leagues make any and all pickups in these last few weeks all potentially both big winners and losers. When looking at the potential of many of these call-ups, my belief is that playing time is of the utmost importance and focusing on this aspect will allow us to weed through the enormous level of player movement. The teams out of contention will be giving most often ample looks to the guys they’ll be assessing in the spring, and in those final couple weeks as teams clinch, the veterans will be rested, again giving those September call-ups an opportunity to display their talents.

As we head into the final weeks of our season the risks are great, as are the rewards, and sometimes in that heated battle, those Fall call-ups can and do make the difference to those final fantasy league standings. Enough intro already – let’s get on to taking a quick scan through the first wave of call-ups.

Mike Pelfry: There were no bats in the pelfry last night as Mike was on a roll. Is this a forerunner to a more consistent and solid approach or a one-timer? He most certainly has the potential to post solid numbers in September for the Mets.

Clay Buchholz: Okay, now that the construction crews have moved into Fenway and commenced work on the statue and shrine, my guess is he’s going to see a bit more action in the immediate future.

Franklin Morales: Okay Todd, this one’s for you. The Rockies will probably be taking a serious look at this guy in September. With a quick return to the rotation for Aaron Cook now ruled out, this 21-year-old southpaw should get an opportunity.

Edinson Volquez: Add Volquez to the list of winners yesterday, although his effort fell into the less-than-spectacular category. Look for him to be a regular fixture in the starting rotation for the Rangers in September.

Matt Chico: Those first-half numbers before the demotion were certainly a good indicator that the potential is there, but when is the future? This 24-year-old lefty had a nice run through May and June and the Nats are hoping for a return to form here.

Kevin Slowey: In eight starts since his demotion to Rochester, Slowey has given up one or less earned runs every time out. There is nothing left for him to prove at the Triple-A level and with the mighty Boof Bonser struggling, expect to see Slowey get an opportunity to start in the next several weeks.

Cliff Lee: Watch this one rather carefully, as the Indians are going to have him working out of the pen for the next while. Some decent innings pitched could lead to a start or two down the stretch.

Jonathan Sanchez: The Giants are most certainly going to be resting those young arms down the stretch, and in his most recent start, Sanchez had a decent outing, going 5 1/3 with seven Ks. With 32 Ks in 23 IP in the minors this year, he could be of help in both the win and strikeout categories.

Ronny Cedeno, Eric Patterson, Geovany Soto: All three of these players are coming off outstanding seasons at Triple-A and should be a big part of the Cubs’ plans for ’08. With the Cubs in a serious pennant chase, the playing time opportunities will probably not be there, but all three should be owned in deep keeper formats. I especially like Soto and that Pacific Coast League MVP award. With 26 HR, 109 RBI and a .353 BA, the future looks very bright for Soto in Chicago.

Garrett Olson: His Norfolk Tide numbers were very solid with a 3.16 ERA and 120 Ks in 128 IP. He has been roughed up pretty good so far in Baltimore, but looks to be locked into the rotation for the duration of the season.

Adam Lind: Hitting .368 for the Syracuse Chiefs in the month of August should guarantee some playing time down the stretch, especially with the Jays out of the race and Vernon Wells hurting.

Julio Franco: From a fantasy perspective, Franco’s contributions should be fairly minor, but any MLB hitter that is still playing at age 49 at least deserves the recognition here in my opinion. Congrats on a great career, Julio!

Dana Eveland: Those outstanding minor league numbers have yet to translate at the MLB level. He’s probably a long shot at best to get any more starts with Arizona this year, but most certainly should be on “watch” lists heading into next spring.

Jacoby Ellsbury: Ellsbury posted a solid average with 41 SBs at two levels in the minors. With the BoSox outfield currently hurting, this should lead to some playing time over the balance of the season and offer help for those looking for some last minute stolen bases.

Chris Volstad: With only six starts at the Double-A level, any contributions this year would be a surprise, but he should get several starts over the final couple weeks of the season.

Josh Anderson: With the ‘Stros seriously missing a speed element, those 40 SBs at Round Rock could translate to some opportunities in Houston.

Jason Bulger: Bulger could be an asset in allowing a bit of rest to the Halos’ pen down the stretch. What gets my attention are those 81 Ks in 51 IP.

Ian Kennedy: He’s seen a rather dramatic ascent to the majors this year, moving up through three levels in the minors and enjoying a very successful debut for the Yankees. In 146 cumulative innings in the minors, he allowed only 91 hits and struck out 163 with a combined ERA of 1.91. It looks like he might be sticking around for a bit.

PS: Wayne, you’re dragging your feet on those call-ups, were you listening?

By Tim McLeod
This entry was posted on Sunday, September 2nd, 2007 at 6:11 pm and is filed under BASEBALL, Rookies, Tim McLeod. You can follow any responses to this entry through the RSS 2.0 feed. You can skip to the end and leave a response. Pinging is currently not allowed.