Jonesing for a Running Attack 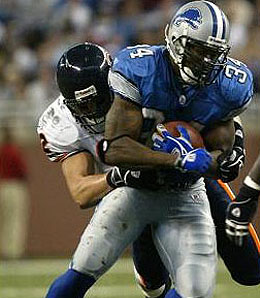 Detroit is hopeful that Kevin Jones can contribute earlier than expected.

The Detroit Lions, desperate for a running attack since Barry Sanders retired almost a decade ago, are banking the hope that Kevin Jones can return from a serious injury earlier than anticipated.

On Saturday, the team removed Jones from the physically unable to perform list and are gambling that he’ll be ready to return from a December Lisfranc left foot sprain and be healthy enough to turn around a running game that ranked dead last in the NFL last season.

Of course, weak running is nothing new to Detroit since all-world Sanders left us all too soon. In Sanders’ final year, 1998, Detroit ranked 10th in rushing, but since then, it has been in the bottom half every year, finishing better than 20th just once. In two of the past four years, Detroit has been the worst rushing team in the NFL.

Jones suffered the injury, which usually requires a full year of recovery, on December 10. But he thinks he’s made significant progress and is almost fully recovered.

Coach Rod Marinelli has conceded that it’s incredibly unlikely that Jones will be good to go for the season opener, yet he didn’t rule it out entirely. Expect Tatum Bell to be the main man in the Lions’ backfield to start the year.

At this point, Jones is considered week-to-week. If he does make it back early, it will surprise a lot of people. This is a very serious problem, and it’s worth noting that no running back who has suffered a serious Lisfranc injury has ever come back to be as talented as he was before getting hurt.

That doesn’t exactly bode well for a return to running glory for Detroit, does it? Of course, even a fully healthy Jones – a back capable of handling a full load and breaking big plays on occasion – isn’t exactly capable of turning this ship around on his own. In fact, he’s never been able to duplicate his fine rookie season of 2004, when he topped 1,100 yards and averaged 4.7 yards per carry.

In fairness, Jones’ fantasy value last year was bolstered by his receiving stats. He had 520 receiving yards last year and 1,200 total yards — not that far off from the rookie season.

Detroit’s rationale for adding him to the 53-man roster is that Jones can now practice with the team and get into football shape, something that will make his early return possible. The alternative – keeping him on the PUP – would prohibit him from playing or practicing over the first six weeks of the season.

The surgeon who performed Jones’ operation says he’s not at risk of re-injuring the foot. But that doesn’t mean he won’t be vulnerable to other, compensatory injuries, not uncommon when you’re trying to protect a particular area of your body.

By RotoRob
This entry was posted on Sunday, September 2nd, 2007 at 6:39 pm and is filed under FOOTBALL, Transactional analysis. You can follow any responses to this entry through the RSS 2.0 feed. You can leave a response, or trackback from your own site.