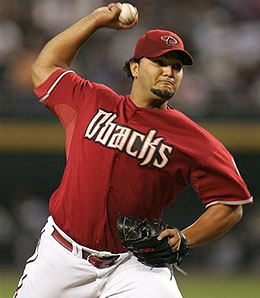 It’s been under two weeks since the gang at azsportshub.com checked in with their latest D-Backs report, and man, how things can change in a fortnight. When we last filed our Arizona report, the D-Backs enjoyed a comfortable four-game bulge with a big series pending against the Padres.

Apparently, that series was bigger than anyone could have imagined, as Arizona dropped three of four, and combined with a poor series against Milwaukee and a tough, extra-inning loss to Colorado last night, the Diamondbacks and Padres are now tied for first in the NL West. The Dodgers are turning things around, too, and have crawled back within four games and, after their win last night ? with two more to come against the Snakes ? the Rox are lurking just five back. It?s September 1 and the battle for the wild, wild west is in full swing.

Things get even more interesting in the coming week and change. The D-Backs still have a glorious opportunity to regain control, with eight games left on this nine-game homestand. After they finish with the Rockies, the Padres come in for three, which may very likely decide this thing, once and for all, moreso if one of the teams can get a sweep. Then, it?s three against the Cardinals, another very hot club.

The last time we checked in on Doug Davis, we begrudgingly conceded that he had been doing well. And his hot streak generally continued through August up until the 20th, when he got hammered for six hits ? three of them homers ? and six runs in just two innings. To his credit, Davis has bounced back, winning his last two starts and doing so in impressive fashion (13 2/3 innings, 10 hits, four runs). What?s impressed me most about his last couple of starts has been his command (15 Ks, three walks) and the fact he?s kept the ball in the park, with no homers allowed. I still can?t bring myself to recommend Davis for fantasy purposes. He just walks too fine a line. I mean, his peripherals scream for a higher ERA than 4.09. He?s been more hittable this year, his K rate is down, his command is worse, he?s second in the NL in walks with 84. Yet, Davis is winning games and maintaining a good ERA. But how long can whatever pact he signed with the Devil last?

Edgar Gonzalez is teasing us again with his strong pitching, establishing himself as the team?s long man. In his last three outings covering seven innings, Gonzalez has given up just five hits and three runs ? two earned ? with no homers, one walk and one strikeout. He?s also earned a win in there, chalking up his sixth victory last Sunday. Gonzalez has shown progress in his hit rates and his K rates this year, but the results haven?t followed suit thanks to his inconsistency. I?ve complained in the past about the fact that he always seems to look like he?s going to break out, but then he takes a step backwards. To me, Gonzalez is a pitcher screaming out for a steady role. I think if he?s given a job and left for a few months, the progress will come. Bouncing back and forth between the rotation and the pen isn?t for everyone. There?s talk that Gonzalez in being considered to take Yusmeiro Petit?s next start, after Petit got ripped last weekend. Gonzo hasn?t made a start since June 26, so if he gets the call, this is his chance to establish himself in the rotation for the remainder of the year. Let?s hope he brings his ?A? game, assuming he gets the shot.

Remember that instant impact Justin Upton made? Going 7-for-17 with a homer to start his career sure sent his stock soaring. Well, in recent weeks, we?re being reminded that this is a 20-year-old rookie. The struggling outfielder got back-to-back days on the pine earlier this week in favour of Jeff Salazar. But that didn?t act as a wakeup call for Upton ? he?s just 3-for-14 since with one run and no ribbies. Upton has to be owned in any keeper format, but if you need help down the stretch, he?s not your man.

While we?re on the topic of hot-shot rookies cooling, Mark Reynolds? 0-16 slump (with 13 Ks!) prompted a two-day hiatus as well (with Jeff Cirillo getting the call to man the hot corner), but he has reacted to the benching better. Manager Bob Melvin gave Reynolds a vote of confidence, saying his job wasn?t in jeopardy and Reynolds has picked up the pace, going 5-for-14 in the last four games, with three runs, a double, a homer and five RBI. Because of his extra-base potential, you?re almost willing to put up with the poor strike zone judgment, but when he?s not hitting anything, that?s when Reynolds needs to be sat down. I mean, again, to put things in perspective, a few months ago, no one knew this guy existed.

As for Salazar, his numbers aren?t exactly screaming for more PT, but I think ?Zona will really want to see what it has on its hands with this guy down the stretch, even though every game will need to have the best possible lineup out there.

Cirillo, by the way, hasn?t done much with the stick since Arizona claimed him last month (3-for-20), but he pitched in with a shutout inning in a 9-0 loss to his ex-mates, the Brewers, on August 20. That?s the second time in recent weeks that a D-Back position player has been called in to hurl an inning, with Augie Ojeda also showing his stuff on the mound. All hands on deck!

By RotoRob
This entry was posted on Saturday, September 1st, 2007 at 2:21 pm and is filed under BASEBALL, RotoRob correspondent report, Team report. You can follow any responses to this entry through the RSS 2.0 feed. You can leave a response, or trackback from your own site.