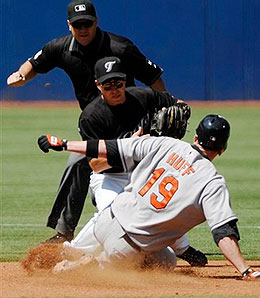 Well, I am back from the hospital and ready to look at some fantasy baseball. I read last week’s Wire Troll and while Tim did a fine job, I will not ever be looking at September call-ups or writing something that long. Let me say this: rookies are for rookies. If you are picking up a September call-up to help you make the stretch run, then you are in worse shape than you think you are. Most of the time, an end of the season call-up doesn’t really wow the league with his fantasy play. So, with all due respect, September call-ups are the riskiest of the risky picks to make for a playoff run in your league. Here’s who I do like this week:

Aubrey Huff: Not that he is going to be available in a ton of leagues, but, if he is unowned, I’d snatch him up. Huff is batting .354/.418/.695 in August with seven homers and 17 RBI after batting .248 with only six homers in the four previous months. Huff has always been a second-half player, so make sure you have him for the stretch run if nobody else does.

Nate McLouth: I’ve mentioned him before and own him in a few of my leagues, but I still see him available in the ones that I don’t own him in. While his batting average won’t wow you (.264 over the last month), his 22 runs, seven taters, 17 ribbies, and seven stolen bases will help you stay in the game, assuming you have other guys that will keep your BA up.

Jayson Werth: Now, with Shane Victorino back from the DL, I will admit that this is a somewhat risky pick in itself. Werth has certainly played well in Victorino’s absence and he has continued to play well since Victorino returned from the DL. Werth is hitting .403 (29-for-72) with three home runs and 18 RBI in 23 games since August 1. With Aaron Rowand and Pat Burrell cemented in place in the Phillies’ outfield already, and Victorino back and playing well, Werth is a very short-term pick-up if you do make it.

Carlos Silva: I, too, like Silva down the stretch as a starting pitcher. Over the past month, Silva has thrown 39 2/3 innings, and put up two wins, 20 strikeouts, with a 2.95 ERA and 0.98 WHIP. If you need a pitcher for the remainder of the season who can get you some quality innings, give Silva a look.

By James Morris
Tags: Aubrey Huff
This entry was posted on Friday, August 31st, 2007 at 10:43 am and is filed under BASEBALL, The Wire Troll. You can follow any responses to this entry through the RSS 2.0 feed. Both comments and pings are currently closed.