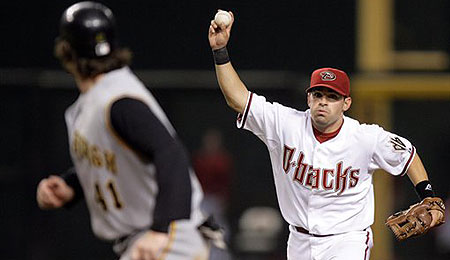 Since we last checked in with a report from azsportshub.com just under two weeks ago, Arizona continues to roll, taking seven of its past 10, while NL West rivals the Padres and Dodgers each continue to spin their wheels. The upshot is that the Snakes have doubled their lead to four games over San Diego. And with under 40 games to go, things are looking pretty sweet for the Snakes.

The Diamondbacks get a glorious opportunity to keep the ball rolling this week with a struggling Brewers team in for a visit, a team that has completely collapsed since enjoying a very healthy lead atop the NL Central just a few weeks ago. That will be followed by a visit from a suddenly inconsistent, NL Central-leading Cubs club. Then, it’s out on the road for what should prove to be the season’s most important series – a four-game set in Petco against the Padres. By the end of August, this race could be all but over, or we could be in for a fantastic final month.

On Tuesday, things got so ugly in a 14-5 loss to the Fish, that back-up infielder Augie Ojeda was used on the mound. The veteran didn’t look out of place at all, tossing a three-up, three-down inning. This wasn’t the first time that Ojeda was pressed into relief duty; he tossed a shutout inning for the Triple-A Iowa Cubs last year. Considering he’s not doing much with the stick this year, perhaps he can extend his career as a reliever. Or not.

Byung-Hung Kim and Joe Kennedy sure didn’t last long with Arizona, getting hammered and quickly designated for assignment. Ah, right. So that’s why they were available on the waiver wire. In their place, Dustin Nippert came back up as did Jailen Peguero, the later for a very brief time, before being sent back down to make room for another starter (Yusmeiro Petit). In other transactions, Chad Tracy’s knee woes finally resulted in a DL stint. To take his place, and help pitch in with the outfield, Jeff Salazar was brought back from Triple-A Tucson.

Chris Snyder is picking things up with hits in seven of his last eight games, going 10-for-29 with five runs, five doubles, two homers and eight RBI. A .317 mark in August and a .342 BA with four homers in 76 at-bats since the All-Star break has allowed Snyder to gain a bigger foothold in the catching job. I still have my reservations – he’s batting just .229 against righties and is not getting on base as often as he did last year – but Snyder has become a more patient hitter this season, and if he can continue putting up numbers like he has over the past few weeks, he may establish himself as a viable fantasy catcher heading into 2008.

By now you’ve obviously noticed that Brandon Webb is on a roll the likes of which don’t come around very often. Forty-two consecutive shutout frames? Three straight complete game shutouts? What is that? In his last six starts, he’s given up just 28 hits and three runs – two earned – in 48 innings, with eight walks and 39 strikeouts. This stretch has allowed Webb to lower his ERA almost eight-tenths of a run. Suddenly, he’s looking like he’s on track to defend his 2006 NL Cy Young Award. Webb leads the NL in innings pitched and complete games, ranks second in strikeouts, fourth in ERA, fifth in wins and eighth in WHIP – certainly better numbers than he compiled when he took home the hardware last year.

With three consecutive shutout innings covering 4 1/3 innings, Juan Cruz is continuing his fine season, pitching particularly well (2.57) since the All-Star break. He’s surrendered just two hits and two walks over this week’s stretch, striking out six. Cruz has been getting plenty of action out of the D-Back pen this year, and although he’s been more susceptible to the long ball, he’s really settled in since he’s been given a consistent role, after shuttling between the rotation and the bullpen last season. Overall, Cruz is 5-1 with a 3.06 ERA, and he’s limited righties to a microscopic .167 BA. I still believe he could close if given the opportunity, but for now, I’d like to see him work his way into a set-up gig.

After a solid July, Tony Clark is looking more like the 2006 version of himself these days, stuck in a 2-for-12 rut with three strikeouts and batting just .208 in August. Here’s a scary thought: his .192 BA against lefties is a massive improvement over what he did last year (.125).

Interesting factoid: 13 times this year, Arizona has surrendered 10 or more runs in a game and, in the games immediately following the bitch-slappings, they’ve won eight and lost just five. That’s a great sign that this team is able to bounce back quickly.

Eric Byrnes just keeps on rolling, hitting safely in his past four games (6-for-16 with two doubles, three RBI and three walks). He had slowed a bit this month, so it’s good to see him pick things up again. On Saturday, Byrnes reached the 70-RBI mark for the third time in his career, and while he’s striking out more often this year, who really cares? The dude is batting .300 with power and speed (fourth in the NL in swipes).

Stephen Drew enjoyed a two-hit, one-walk night on Tuesday, but as he is wont to do, he’s sucked since then, going 2-for-13. Drew showed signs of life in July, but has gone right back into the tank since, batting a mere .208 since the break and just .191 in August. We’ve got to be patient here; this is just his first full season, of course. And the Diamondbacks, to their credit, have stuck with him, but Drew continues to struggle to get on base often enough.

By RotoRob
This entry was posted on Monday, August 20th, 2007 at 9:47 pm and is filed under BASEBALL, RotoRob correspondent report, Team report. You can follow any responses to this entry through the RSS 2.0 feed. You can skip to the end and leave a response. Pinging is currently not allowed.